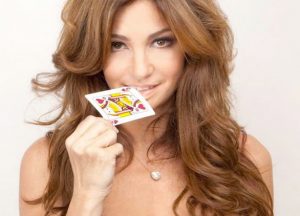 Beth Shak used strip poker as a way of getting a more intimate read on her dates. (Image: thebeautybean.com)

Part-time poker player Beth Shak has apparently used her skills at the felt to win more than money over the last few years.

According to a recent interview with Social Life Magazine, the former wife of businessman and poker player Dan Shak used to play strip poker with her dates following the breakdown of her marriage.

Although Shak might not be the greatest poker player in the world, she has won more than $400,000 in live tournaments and even managed a second place finish in the 2007 WSOP’s $3,000 Not Limit Hold’em event.

Playing alongside some of the top players in the game not only appears to have given Shak some skills but enough confidence to play for her dignity.

“I used to play strip poker with my dates. Because of my experience and expertise, I was usually able to decide whether I wanted to see my date naked or allow him to take my clothes off,” Shak told Social Life.

Ever the provocateur, Shak went onto say that women are often at a disadvantage when they play strip poker because they tend to wear fewer clothes in the summer.

But, regardless of the discrepancy in stakes, she still claims it was her method of choice for getting a read on a potential partner.

While a lack of clothes might not have been enough to stop Shak playing strip poker with her dates, Rick Leventhal was.

Shak married the FOX News correspondent earlier this year after just four months after they met. The Vegas ceremony was certainly a clash of cultures as Lydia Ansel, a renowned violinist who played for Rod Stewart, stood alongside an Elvis impersonator at the altar.

Although the ceremony itself might not have been to everyone’s taste, Shak and Leventhal appear to be a happy couple which means her days of playing strip poker with strangers are over for now at least.

In fact, now she doesn’t have to focus on playing strip poker with her dates, Shak can spend more time taking part in charity tournaments such as the Deal Me in for JED event she played back in February of this year.

While she may not get the same sort of satisfaction from these tournaments, she should at least be commended for the fact she uses her profile to help raise money for those who are less fortunate.