It was calm before the storm on Day 5 of the WSOP Main Event. Then, in the middle of level 26, the unusual Vegas storm hit — causing multiple power outages at the Rio until tournament officials decided to call an end to the day’s session 83 minutes early. 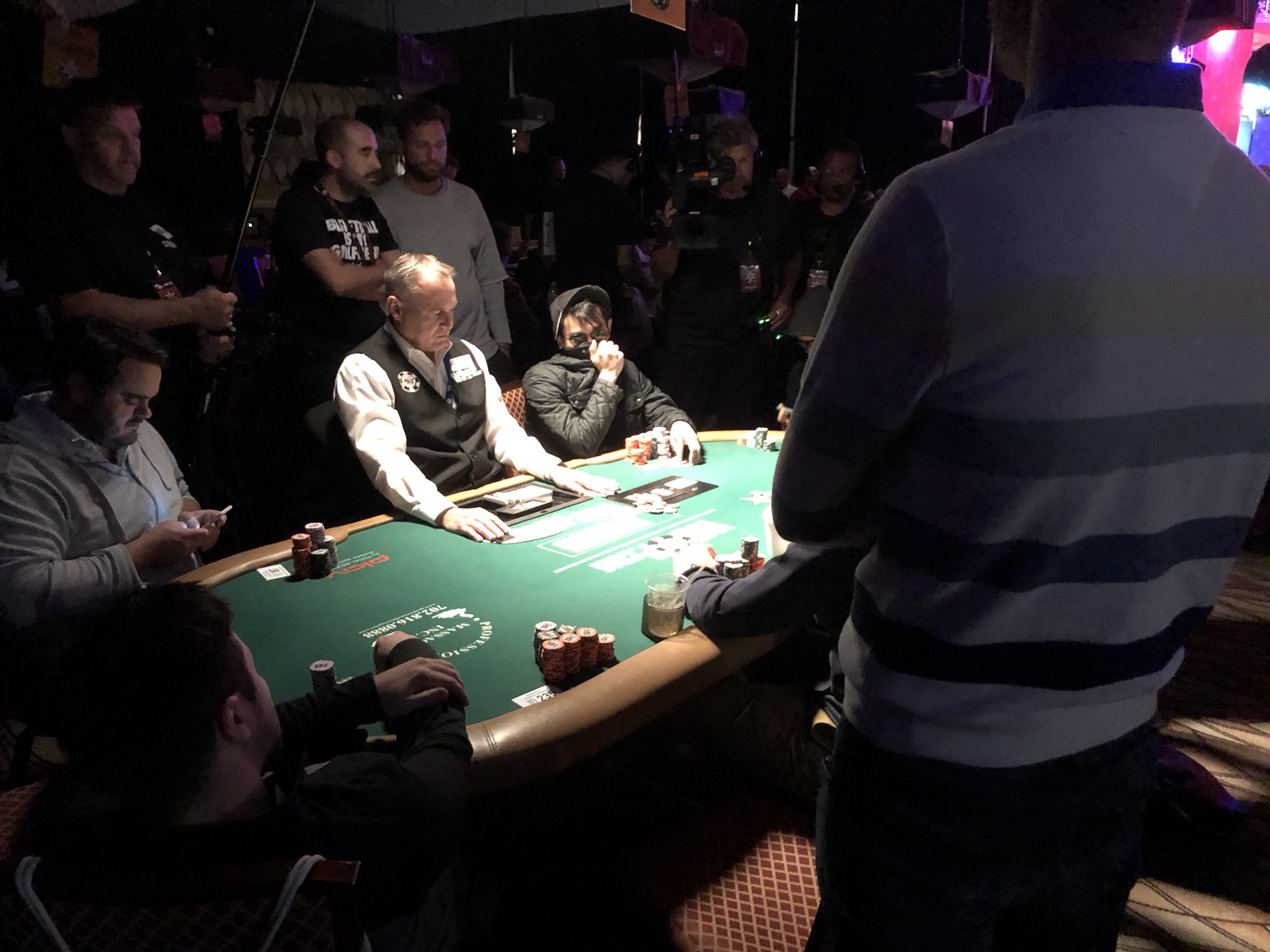 When the lights went out toward the end of Day 5, hands that were in progress continued with the help of alternative illumination. (Image: Kevin Mathers/Twitter)

Before the lights went out, Joe Cada perfected his short-stack poker game, Benjamin Pollak stayed alive in his quest to make back-to-back final tables, Cliff Josephy took a sick bad beat to bust, and Kelly Minkin was left as the last woman standing.

At around 11:30 pm, a thunderstorm winds around the valley clocked as high as 70 mph. Much of the Las Vegas Strip and downtown went dark, while McCarran airport briefly closed. The Rio eventually experienced multiple power outages, too.

Without lighting, play could not continue, obviously, or at least not for long.

When the Amazon Room went dark, ESPN camera crews used some of their generator-powered equipment to shine spotlights over tables where there was still action pending. Players also used lights from their mobile phones to prevent sheer mayhem from ensuing.

Although some of the lights in the Amazon room soon came back on, play was stopped for the night with 109 remaining players all still dreaming of winning $8.8 million.

Since Chris Moneymaker won the Main Event in 2003, only two players – Dan Harrington (2003/2004) and Marc Newhouse (2013/2014) – have made back-to-back final tables. Benjamin Pollak, who is currently 16th in chips, has a chance to join that exclusive club of players.

Pollak, last year’s 3rd place finisher, could become the second Frenchman to appear at the final table twice in the past decade, joining Antoine Saout, who also made the final table last year (and finished 5th) and in 2009 (finishing 3rd).

Another Frenchman, Sylvain Loosli, also has an opportunity to make his second final table appearance of the past decade. The 2013 4th place finisher will come back to the Rio on Tuesday with a slightly above average stack (3.7 million).

Joe Cada is the only other former Main Event final tableist still alive in the field. The 2009 champion and 2018 bracelet winner ($3,000 No-Limit Hold’em Shootout) had been nursing a small stack for most of the past two days but continues to survive.

The Michigander waited hours for an opportunity to score a big double-up and finally got it in the middle of the session with pocket jacks against Kenneth Watson’s big slick. Cada won the race, eliminating Watson in 147th place, and saw his stack bump up to 2.5 million — average size at the time.

He ended up bagging 2.965 million chips, a bit below average but good for 57th place with 109 remaining.

Cada and James Akenhead had a bit of a reunion on Monday. Both 2009 November Niners were seated at the same table early in the session.

Cliff Josephy had been one of the big stacks for much of Day 4 and into Day 5 and came within one sick river card of being in serious contention for a second final table in three years.

The 2016 3rd place finisher got his big stack of 3.8 million all in pre-flop with KK against Michael Dyer’s big slick. With over 7.6 million in the pot, enough to propel either player into the chip lead, an Ace landed on the river, sending online poker legend “JohnnyBax” home in 123rd place.

There are 108 males and just one female left in the 2018 Main Event. And it’s going to take a miracle to see a woman at the final table for just the second time in history.

Barbara Enright, the only woman to ever make the final table (5th place in 1995) was eliminated in 292nd place on Monday, and now it’s up to Kelly Minkin to become the second.

Minkin, who spent much of the day at the ESPN feature table, has just 1.2 million chips (20 big blinds), after starting Day 5 with a big stack. She’ll need some rungood early on Day 6 or we’ll have an all-male final table for the 48th time in 49 years.

When Day 6 begins at 11 am PT on Tuesday, massive pay jump considerations will be on the minds of the remaining 109 players. Each player is guaranteed $57,010 but one will earn $8.8 million and nine will earn at least $1 million.

Six-figure payouts start at 64th place, which will occur on Day 6. By the time Day 7 kicks off on Wednesday, the final session before the final table, all players will likely be guaranteed at least $200,000.

Never fails , Murphy’s Law , Whatever will happen , happens and at the worst possible time ”
One would think they would have generators for back up power … then those can only go for so long to.
They can always pick up again. This as much the same as when one gets disconnected online !