Florida’s Benjamin Zamani jumped out to an early lead in the WPT Season 15 Player of the Year (POY) race, and (barely) hung on to claim the title. On the same day he wrapped that up, New Yorker Tony Sinishtaj won the WPT SHRP Showdown and Jason Mercier shipped a high roller event. Both tournaments took place at the Seminole Hard Rock Hotel and Casino in Hollywood, Florida. 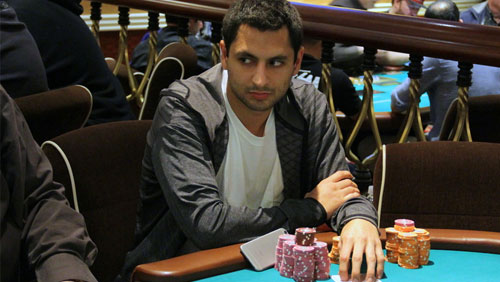 Benjamin Zamani held on against tough competition to claim the WPT Season 15 Player of the Year (POY) award. (Image: worldpokertour.com)

Zamani had to sweat it out until the end. A few players, including World Poker Tour announcer Mike Sexton, still weren’t mathematically eliminated heading into the season’s final two main events in the Sunshine State.

Sam Panzica nearly pulled ahead in the POY race in the final event, the $10,000 Seminole Hard Rock Poker Finale. Trailing Zamani by 100 points, he busted out in 40th place, good enough for just 50 points.

Zamani made three final table appearances this season, twice finishing in 2nd place. He now has more than $1.4 million in career WPT winnings, but he’s still chasing that first main event title. He’ll have to settle for Season 15 Player of the Year. Not a bad consolation prize.

Tony Sinishtaj is the champion of the $3,500 buy-in Seminole Hard Rock Poker Showdown. The event concluded on Wednesday. He took home $661,283 for outlasting 1,207 players, including a talented final table.

Sinishtaj already had nearly $600,000 in career live tournament winnings, but this was his first cash on the World Poker Tour. The final table included three of the top players in the world: Dan Colman, Darryll Fish, and Robert Mizrachi.

In the hand, Sinishtaj shoved all-in on the turn with a flush draw against Colman’s pocket aces. Dan tanked for a bit before calling. The two had near-even chip stacks. The flush hit on the river, leaving the 2014 WSOP Big One for One Drop winner with only a few big blinds to his name. The eventual runner-up, Fish, sent Colman home on the following hand in 4th place ($217,686).

Mizrachi was eliminated in 3rd place by Fish about an hour later, for $293,864. That left the final two to battle it out heads-up for the title. The match was intense. Darryll fought back from a significant chip disadvantage to even things up. But Sinishtaj caught too many hands in the end.

Another One for the “Bad Reg”

Jason Mercier won another high roller. For a “bad reg,” as Doug Polk likes to call him, the Team PokerStars pro sure does win a lot of poker tournaments.

On Wednesday, Mercier scooped the $25,000 High Roller for $749,600. There were 116 entries, including runner-up Justin Bonomo. Jason can add this trophy to the pair of bracelets and WSOP Player of the Year he won last summer. He’s part of a coterie of players who consistently show that skill trumps luck when it comes to  lifetime results.