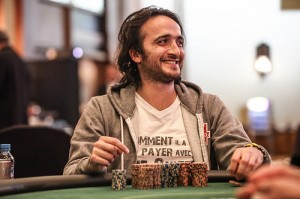 Belgium poker players may want to console themselves with some of their fine chocolate when they hear this gut-kicking news, because Belgium wants to hit poker players where it hurts, in the fiscal regions.

In the same week that Belgian player Davidi Kitai finished second at the Winamax Open in Dublin, authorities announced their intention to levy a tax of up to 75 percent on players’ earnings, suggesting that Kitai might want to remain in Ireland, where there is no tax on winnings at all, for the foreseeable future.

While Belgian gaming law stipulates that gambling winnings should be tax-free, the government has decided that an exception should be made for poker players, because their income, unlike a sudden gambling windfall, cannot be considered to be an “exceptional event.”

“An individual who plays poker regularly and who devotes enough time and efforts to the game to make it a profession should declare his winnings as if they were any other form of professional income,” explained an official. However, this also means that they will be able to deduct travel and accommodation and, hopefully, expenses such as tournament buy-ins on their tax forms.

One Hell of a Rake

While the idea of a 75 percent tax sounds like one hell of a rake in a game that is become increasingly difficult to scratch a living from, authorities are quick to reassure us that this figure only applies to the very highest tier of earners, of which there are perhaps 20 in the whole of Belgium. These 20 players have been recently asked to report their winnings to the tax authorities and we can only assume they are hurriedly packing their bags as you read this.

Belgium is a very strictly regulated gambling regime, that in recent years has blacklisted and aggressively pursued unlicensed operators who offer services to its citizens. It is also one of the few countries in the world where players can be prosecuted simply for gambling on unlicensed sites. According to article 64 of the Belgian Gaming Act, playing illegal games of chance can theoretically get you anywhere between one month and three years in prison and a fine of anything up €150,000, which can be doubled for reoffenders.

Free Poker Apps Could be Blacklisted

However, the Belgian Gambling Commission upped the ante this week by expressing its desire to add play-for-free apps to its burgeoning list of blacklisted companies. The Commission has decided that apps that offer free “play-for-fun” poker and casino games should be banned, as they “lower the bar” for people to participate in real-money gambling. Apps should be made to adopt strict verification procedures or face being blacklisted, the Commission told the Belgian press.

This would, however, presumably require considerable amendments legislation and even a redefinition of the very word “gambling.” In fact, the word’s current interpretation, as a game of chance in which a stake is risked, would suggest that the regulation of free poker and casino apps does not currently fall under the Gambling Commission’s remit.