Battle Rages on at 2017 WPT LA Poker Classic, as Mike Sexton and Daniel Strelitz Tough It Out

Day Four at the $10,000 buy-in 2017 WPT L.A. Poker Classic Main Event in Los Angeles concluded Tuesday evening. Daniel Strelitz began the day with the chip lead, and went home at the end of the night in the same position. 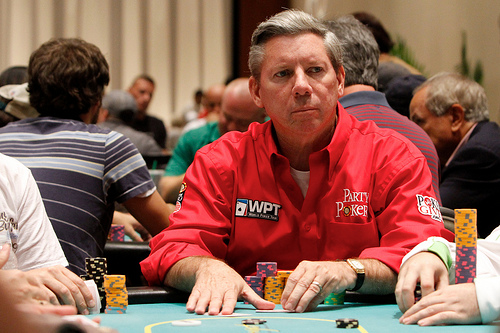 The California local has six cashes on the World Poker Tour, but has never made a final table. He could be a day away from achieving that goal. There will be just 18 of the 521 original entries left when play resumes at Commerce Casino at noon PST on Wednesday. Day Five won’t complete until the television final table of six players are the only ones left standing. Those gentlemen will then return on Thursday to determine a winner.

Former WPT Player of the Year Joe Serock bagged 1,157,000 chips. The only thing left for him to accomplish on the World Poker Tour is a Main Event championship. This one would be worth $1 million and, of course, admission to the tour’s exclusive Champions Club.

Head of the Class

Mike Sexton is almost universally revered, and most of the poker world will be cheering him on as he chases his second WPT title in four months.

The long-time WPT commentator is 8th in chips (908,000), an above-average stack. He began the day in 2nd place and actually increased his stack, but got lapped by some other players. Sexton, a Poker Hall of Famer, is one of the most beloved figures in poker history, just ask the chip leader.

“He is a class act,” Strelitz told WPT.com after Day Four concluded. “He came up to me and congratulated me. He’s an awesome guy. I really like him.”

Sexton is fortunate to still have chips. He lost a large portion of his stack early in the day, but bounced back, thanks to a pair of coolers that ran in his favor.

Four past WPT champions busted on Day Four, leaving Sexton and James Calderaro (318,000) as the lone remaining Champions Club members. But some of the game’s top players still have a shot at joining the club.