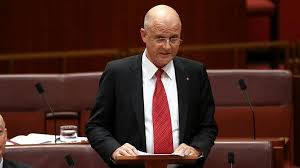 Online poker was banned in Australia but not without a fight from lawmakers such as Senator David Leyonhjelm. (Image: sbs.com.au)

Online poker and live sports betting have officially been banned in Australia. Huffington Post Australia, one of the leading political news websites in the country, reported the Senate passed an amendment to close up loopholes that previously made it legal for citizens to gamble online legally.

There are no loopholes anymore. Internet poker is now illegal in the Land Down Under thanks to the passing of the Interactive Gambling Amendment Act of 2016. Poker is highly popular in Australia, and some politicians are upset with the new law.

“It’s stupid,” Liberal Democrat Senator David Leyonhjelm told Huffington Post Australia. “If you want to play poker, there are lots of opportunities in Australia, at casinos and tournaments. It’s not as if there isn’t a great deal of poker playing already, but they’re just stopping it online. The whole world is online now.”

The Senator, a vocal opponent of the amendment, acknowledged that poker players will still find a way to play poker online. He said those who are determined to play will use a virtual private network (VPN) to access internet poker sites.

The 2001 Interactive Gambling Act was put in place to prevent citizens from gambling online. But that hasn’t stopped many Aussies from playing on sites such as 888poker and PokerStars. With the new law, it will be impossible for anyone located in Australia to play poker online unless, as Senator Leyonhjelm said, they use a VPN or offshore bank account.

In January, 888poker exited the market due to the pending anti-online gambling law put in place. The poker site saw the writing on the wall and got out before everything fell apart.

PokerStars didn’t follow its competitor out the door but they did acknowledge earlier this year that all poker sites may be forced out.

It appears to feel a bit like Black Friday in 2011 did in America to those living in Australia. For many Aussies, online poker was more than just a form of recreation: it was a way to earn a living.

Derryn Hinch, a Senator, responded to his Tweet. He let his constituent know he opposed the new law. Others thanked the lawmaker for doing his part to stand up for online poker.

The Australian Online Poker Alliance, an organization similar to the Poker Players Alliance in the United States which fights to keep internet poker alive, is urging citizens to fight back against the federal ban. The new law hasn’t been put in place yet and no timetable has been set on when sites such as PokerStars will exit the market.

I’m so sorry my Aussie friends, now you are as “free” as US citizens to play online 🙁

move to Jersey or better yet Delaware

Love to move from Australia,highest taxed country in the world,parasitic government living and protecting
poker machines that make and destroy so many lives,but the money makes the rules and not what,s really right for the Australian people.