After two days of play at the $10,000 Aussie Millions Main Event, an actress leads the 151 remaining players. Jennifer Tilly, a former Academy Award nominee, has more chips than anyone else (497,100).

There are still three days remaining before this event concludes, but no one is in a better position. 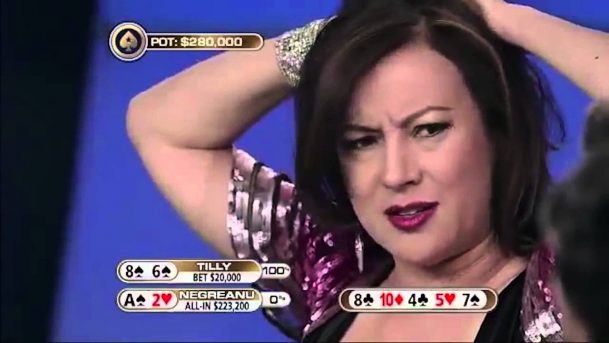 Should Tilly take down this event, she would more than double her career live tournament earnings. Up to this point, she has $957,000 in career winnings. She has played in many high stakes cash games as well. Her long-time boyfriend Phil Laak, was eliminated on Day One.

If the actress has any hopes of winning her first major tournament since the 2005 WSOP Ladies event, she’ll have to outlast some of the best players in the game. That includes Fedor Holz, arguably the best player in the world.

The 23-year old German, now considered a “recreational pro,” bought in on Day Two and ran his stack up to 175,700. It was an up and down day for the 2016 GPI Player of the Year runner-up. He built a huge stack early, then lost a large portion of his chips before finishing up strong.

Fedor is currently second in chips in the $100,000 Challenge. That event will resume after the Main Event concludes.

Perhaps the most consistent tournament pro ever, Erik Seidel, is among the chip leaders. What else is new? He will head into Day Three with 309,100. If it seems like he makes a deep run in nearly every high roller tournament, it’s because he does.

Tony Dunst, last year’s runner-up, has a healthy stack (242,600). The WPT commentator and internet poker pro has become quite a force in live tournaments. His heads-up opponent in this event last year, Ari Engel, will not repeat his title. He busted on Day Two.

Tilly isn’t the only celebrity left in the field. Shane Warne, a former star Australian cricketer, finished up Day Two with 146,500.

There are numerous other big name pros remaining, some with large stacks. That list includes Mike Dentale’s hated rival. Cate Hall has 153,100, which is about average.