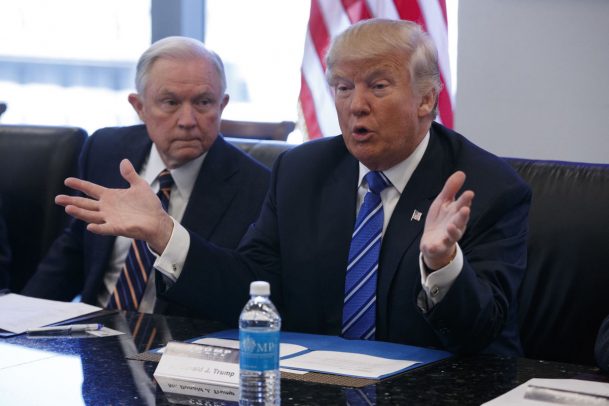 Republican Alabama Senator Jeff Sessions, left, is President-elect Donald Trump’s pick for US Attorney General. The conservative has shown some anti-online gambling leanings, having told the Senate during this week’s hearings that he may review the DOJ’s 2011 interpretation of the Wire Act. (Image: AP)

Although the Alabama conservative is yet to be confirmed as the next AG, Republicans hold the majority in the Senate, meaning it’s likely he’ll get approved. While some democrats will be hoping he trips himself up with some unintended revelations, the likelihood is that he’ll become AG in the coming weeks and that could be bad news for the online poker community.

Poker on the Agenda

During his Senate Judiciary Committee hearing on January 10, Sessions was quizzed on a number of topics, including the DOJ’s 2011 interpretation of the Wire Act. After lawmakers in New York and Illinois asked for clarification of the 1961 law, the DOJ reviewed the provisions of the act in 2011, shortly after online poker’s infamous Black Friday crackdown by the FBI on April 15 of the year. The newly interpreted vision wasn’t revealed publicly until right before Christmas on 2011, however.

Given that online poker wasn’t a reality when the Wire Act was written, many have argued that it was only designed to cover sports betting specifically, and communications pertaining to such made via a telephone or wire messages in general. Taking this into account, the DOJ concluded that online poker is not covered by the law.

“Interstate transmissions of wire communications that do not relate to a ‘sporting event or contest’ fall outside the reach of the Wire Act,” confirmed the DOJ in its 2011 reinterpretation.

At the time, online poker supporters hailed it as a victory for the industry, as it meant that at least one federal law wasn’t able to stop any potential state’s regulation of the game. In fact, following the DOJ’s interpretation, the states of New Jersey, Nevada and Delaware were able to pursue state-wide regulation.

Despite his potential future boss Trump having previously shown support for the online poker industry, Sessions has said he would revisit these issues. Suggesting that he was “shocked” by the 2011 decision, the AG nominee may soon be in a position to overturn the decision.

Although Sessions would have to clear a number of hurdles before he has the chance to reverse the opinion (if, indeed, that’s what he wants to do), the Poker Players Alliance (PPA) his urged him to consider states’ rights.

While we already know that President-elect Trump is a supporter of states’ rights, the PPA will be hoping its open statement to Sessions strikes a similar chord.

“A reversal of this decision would be a radical departure from the precedent given to the independent and legally based opinions generated by DOJ’s Office of Legal Counsel (OLC),” PPA Executive Director John Pappas wrote in an official press release on January 10, 2017.