The World Series of Poker Circuit for the 2017/18 season kicked off this past weekend at Harrah’s Cherokee in North Carolina, and it was four amigos from Southern California who made their presence felt like an L.A. earthquake.

Mineral water mogul Harry Arutyunyan walked away with a $283,597 top prize, but three of his good friends from the City of Angels also flew to the top of the pack and picked up some bling of their own. 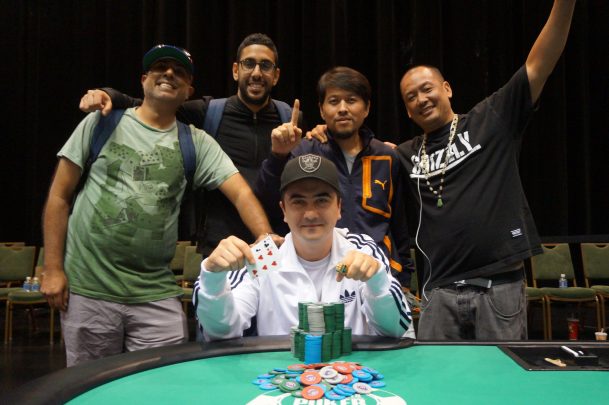 Harry Arutyunyan celebrates with his friends after winning the first Main Event of the 2017/2018 World Series of Poker Circuit season. (Image: WSOP)

Going for the Gold

The 33-year-old Arutyunyan earned his first gold ring and a seat into the 2018 Global Casino Championship, becoming just the second person to do so after Todd Mercer won the stop’s Casino Champion title. The $1,675 Main Event drew 1,022 entrants.

It was fitting given Arutyunyan only traveled to Harrah’s Cherokee to cheer on his friend Sean Yu at this year’s Global Casino Championship, which was a $10,000 buy in for those who hadn’t won their seat during the previous season, which Yu had.

Arutyunyan and his posse had even more to celebrate when friends Gregory Armand and Scott Stewart, also from SoCal, both won rings at the stop.

“We got rings, bracelets, a global cash, a main cash,” Harry Arutyunyan told WSOP officials while pointing to his friends on the rail. “We are taking it all back to L.A.”

When the final 19 players return to action on Day 3, Arutyunyan sat second in chips. He quickly snagged the chip lead, which he wouldn’t relinquish. In the final hand of the tournament, which was Hand #170 of the final table, the Los Angelean was battling Atlanta’s Randy Lowery with the blinds at 50,000/100,000/10,000.

Lowery raised to 325,000 and Arutyunyan defended to see a 9♠8♣5♣ flop. Arutyunyan check-called a bet of 300,000, and then checked the 10♠ turn. Lowery bet 500,000 and then called when Arutyunyan check-raised to 1.3 million. When the 2♣ completed the board on the river, Arutyunyan moved all in and Lowery called with the 10♥8♥ for two pair. Unfortunately for him, it was no good, as Arutyunyan had flopped a straight with the 6♥7♣.

“It’s very hard for me to leave work for too long,” Harry Arutyunyan said when asked if he’ll be playing more event as a result of his win. “I have businesses to run, two kids, a wife. And to just travel the circuit, I have to pick and choose carefully what to play.”

Aside from playing poker when he can, Arutyunyan imports mineral water from Armenia.

“The heater has been going on for a while,” he told WSOP officials. “10 months or so. The Main Event was an unreal experience. I don’t think I’ve ever been as physically or mentally tired from a poker tournament in my life, but there was also adrenaline. It was unbelievable.”

The WSOP Circuit will now head to Foxwoods in Connecticut where they will host 12 rings events between August 17-28. From there, it’s on to IP Biloxi from September 7-18.