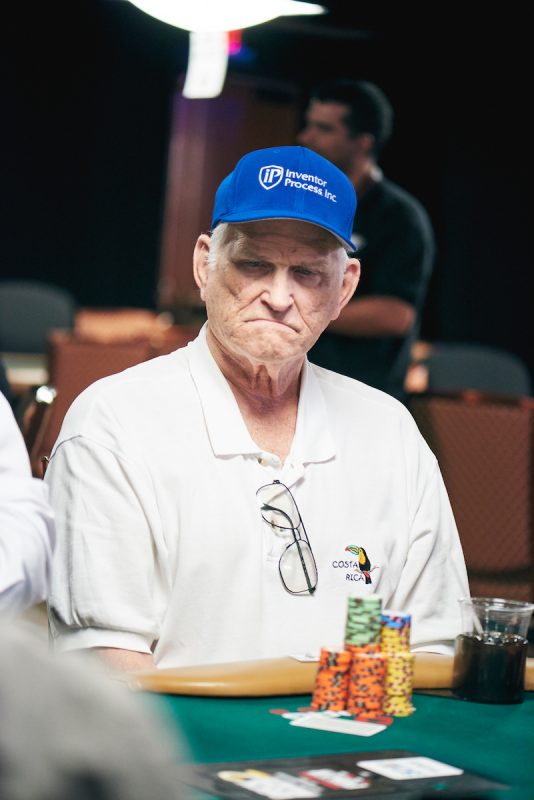 T.J. Cloutier hopes to add to his $10.3 million war chest of wins on Friday, as he tries to defeat the remaining 17 players for his seventh career bracelet at the 2017 World Series of Poker in Event #41, the $1,500 Pot-Limit Omaha. (Image: Antonio Abrego/pokerphotoarchive.com)

His 449,000 chip stack is well above average, and puts him in 6th place out of 18 remaining players hoping to win $231,483. Cloutier will be going for his seventh career bracelet on Friday.

Cloutier competed against pros such as Johnny Moss, Stu Ungar, Amarillo Slim, and Doyle Brunson in his prime.

The former UC Berkeley football and baseball athlete doesn’t play poker nearly as much as he used to, but he still makes a point to stop by the Rio each summer to school some of the younger kids at the World Series of Poker.

When your final table includes Max Pescatori, Ted Forrest, and Justin Bonomo, and you win the tournament, that’s a heck of an accomplishment. Hats off to Ernest Bohn from Whiting, New Jersey.

Bohn not only scooped his first career bracelet in Event #40, $1,500 Seven Card Stud Hi-Lo 8 or Better: it was his first-ever win at the WSOP. The 68-year-old retiree came out to Las Vegas to play in a few events and now will head home with $173,228.

Bonomo (5th), Pescatori (6th), and Forrest (8th) have a combined 11 WSOP bracelets. But they were no match for Bohn on Thursday.

Carrel doesn’t have much on his WSOP resume, just four career cashes and no bracelets. But he’s far from a fish in a sea of sharks. The London resident has been quite successful online and in high-roller events around the world. He’d like to add a WSOP bracelet to his resume on Friday.

Player of the Year Favorites in the Mix

Daniel Negreanu and James Obst are in contention for WSOP Player of the Year. Just past the midway point, both are in the top five. And both made it to Day Two in Event #44, the $3,000 buy-in HORSE.

Day Two in Event #43, $1,500 No-Limit Hold’em Shootout gets underway Friday with 120 players left in the field. A pair of 2016 November Niners, Vojtech Ruzicka and Kenny Hallaert, made it past Day One.

But the main attractions on Friday will be watching Negreanu and Obst battle for the coveted Player of the Year award. And, of course, following T.J. Cloutier’s chase for that seventh bracelet.

Cloutier can still play poker. Anyone wishing to get 7 bracelets, even more having that age, congratulations on the great attitude in poker.