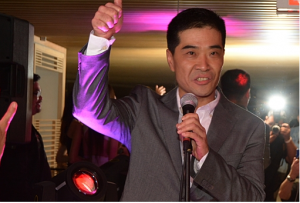 The Asian Poker League’s James Kim believes that the APL Beijing will not suffer any of the legal troubles experienced by 2015’s Nanjing Millions. (Image: somuchpoker.com)

The Asian Poker League is due to hold a poker festival in Beijing from 12 -18 August, the first on Chinese soil since PokerStars’ APPT Nanjing Millions was dramatically raided by authorities and shut down over a year ago.

In the early hours of April 17th, 2015, four days into the Nanjing Millions Main Event, the Chinese National Police swooped in on the Wutaishan Sports Centre, where a huge field of 2,732 players had gathered to participate, pulling the plug on the Millions.

Reports of exactly what had occurred were initially thin on the ground, due to restrictions on reporting and blogging from within mainland China, but a sign on the door explained that the club had been closed down by police on suspicion of illegal gambling.

Two people, Jian Yang and Li Su, were arrested and charged with running an illegal gambling house and submitting false application materials to Jiangsu Provincial Chess Sports Association. Both were managers of Beijing’s Star Poker Club and organizers of the APPT event, and could face up to ten years in prison if convicted.

PokerStars was quick to distance itself from the incident, stating it was merely a sponsor and not an organizer of the tournament.

Hopes had been high for the Nanjing event, which came off the back of a hugely successful Beijing Cup, the APPT’s first foray into mainland China, which had attracted 2,732 players, an APPT record.

No Repeat in Beijing, Says APL

While gambling is illegal outside the semi-autonomous enclaves of Macau and Hong Kong, a law that is rigorously enforced and punished harshly, the Chinese government takes a reasonably liberal attitude towards tournament poker.

Tournaments are promoted as “mind sports” and in 2012 the General Administration of Sport of China, the sporting governing body, permitted the holding of poker tournaments in Hubei Province, which surrounds Beijing, and elsewhere. This paved the way for the WPT to hold events in 2012 and 2013 in Sanya, on the island of Hainan.

James Kim, Operations Director of the recently-formed APL told somuchpoker.com recently that he wasn’t concerned about a repeat of Nanjing at the Beijing Poker Club next week. He stressed that authorities swooped in on the Nanjing Millions because of the existence of cash games and tournament re-buys, which are banned in China. His event would be monitored more closely to ensure that everyone plays by the rules, he said.