Ashley Adams Conquers Goal of Playing Poker in all 50 States 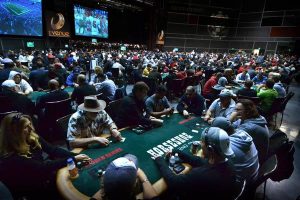 Ashley Adams set out and accomplished the goal of playing poker in all 50 states. (Image: Full Tilt)

Ashley Adams, a poker player and writer, accomplished a goal that top pros such as Phil Ivey and Daniel Negreanu haven’t.

In fact, Adams is likely the only poker player to accomplish this goal. What is this goal? To play poker in all 50 states.

The Bostonian finished off his 50-state tour recently in Mission, Oregon, playing in a $1-$3 no-limit hold’em cash game at Wildhorse Resort & Casino.

The cash game session concluded with a $30 loss, according to a post on his blog “The Poker Perspective”, but that isn’t the story here.

Adams began his journey in 2005, years after he began playing poker.

Well, sort of. On a road trip that year, Adams came to the realization that he had played in more states than not. It was then the idea of playing poker in every state seemed like a fun goal to set.

Simply setting out a goal to play poker in every state is easier said than done. Adams figured that out the hard way.

Poker isn’t legal in 15 states. In some states, such as Texas, all forms of gambling are illegal except on Indian reservations. That may seem strange considering Texas is the state where the most popular poker game was founded.

In states such as Hawaii and Alaska where gambling is completely illegal, Adams had to find home games to play.

As more and more states begin licensing and regulating online poker sites, additional poker rooms around the country will pop up. Until then, finding a poker game in many states isn’t an easy task. Just ask Ashley Adams.

Adams played in major events such as the World Series of Poker, in some famous casinos, and in a Rabbi’s home game along the way.

With poker being illegal in Idaho, Adams had to dig deep to find a game. He contacted a Synagogue in Boise to inquire about when they hold religious services since he is Jewish.

Adams then dropped the, “oh, by the way, I’m looking for a poker game” line in the message.

The Rabbi then sent out an email to members of the Synagogue asking for poker players to join his game. Then, a game was set up and Adams was able to cross Idaho off his list. That was his 49th state, with Oregon up next and last.

Over the summer, Adams took a shot at surpassing a field of more than 22,000 players in The Colossus at the World Series of Poker. He played in home games and underground games all over the country, and even took his game up to Canada.

Adams set out and accomplished a goal that many poker players, even the top pros, could only dream of pulling off. Bravo.