Season XVI of the World Poker Tour is just six stops in, and already Art Papazyan has won two main events. Five weeks ago, he won the Legends of Poker, and on Wednesday night he became a two-time WPT champ by winning the WPT Maryland Live! for $389,405. 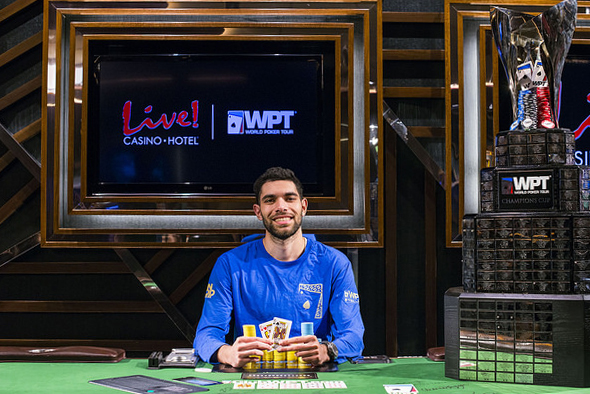 By winning the $3,500 buy-in WPT Maryland Live! Main Event, a tournament that drew 561 runners, Papazyan became the 27th player in WPT history to win more than one title, and just the eighth to do it in the same season. The other seven include Gus Hansen and Howard Lederer, who both did it in Season I, as well as Erick Lindgren (Season II), Tuan Le (Season III), Darren Elias (Season XIII), Anthony Zinno (Season XIII), and Sam Panzica (Season XV).

Papazyan also earned a $15,000 seat into the season-ending WPT Tournament of Champions, but since he already had one from his previous victory, he gets to take the value in cash. Including the $668,692 he won for defeating Phil Hellmuth heads-up in the WPT Legends of Poker, Papazyan has won $1.06 million on the WPT in just over a month.

In his latest victory, Papazyan bested Zachary Donovan after 56 hands of heads-up play. The final hand of the tournament happened in Level 32 (80k/160k/20k) when Donovan moved all-in for 2.925 million holding the A♥4♠, and Papazyan woke up with the K♠K♥. Donovan’s best shot at staying alive was to catch an ace, but he was left wanting as the board ran out a dry 10♣10♥8♦5♦J♣.

“I started the year out great and the summer was tough,” Donovan told WPT officials after the tournament. “It’s tough to brick a summer and then get back to the other grind. It’s tough to do, but I’m glad I didn’t take a longer break like some of the other tournament players did.”

Donovan, who began the final table as the short stack, finished in second place for $262,930, which was the biggest cash of his career.

Last season, Ben Zamani amassed 2,550 points over the course of the season to win Hublot WPT Player of the Year honors. Just six stops in to the new season, Art Papazyan has 2,400 points, which is double that of Guo Liang Chen and Jay Lee, his two closest competitors.

“I’ve worked really hard on my game in the past year thanks to my friends who really helped me with my game,” Papazyan told WPT officials after the win. “I owe a lot to them. I’m fortunate to be in this position now.”

Season XVI of the WPT continues Oct. 21-25 with the $5,000 buy-in WPT Bestbet Bounty Scramble in Jacksonville. In that tournament, designated players will have $2,500 bounties on their head for whoever eliminates them.