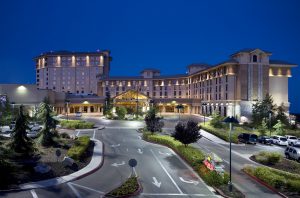 Chukchansi Gold Resort & Casino: While tribal factions squabble at gunpoint over ownership, the casino’s 1300 workers remain in limbo and tourists are forced to change their plans. (Image: mccarthy.com)

An armed California casino raid in the central part of the state led to a shutdown of the tribal casino by a federal judge this week. But this wasn’t your typical casino robbery situation by any means.

The closure of the Chukchansi Gold Resort & Casino in Coarsegold, California occurred following a bizarre armed standoff between two rival factions, apparently wrestling for control of the business. While details are sketchy, it appears one of the factions had been ousted in August from Chukchansi, and returned last week in an apparent attempt to seize official casino documents.

Reportedly, 20 men entered the casino at 6pm last Thursday with guns drawn and, as customers fled, marched security guards into one corner of the building. Some of the guards were assaulted, according to reports, but no customers were injured. The casino was evacuated by Madera County Sheriff deputies.

“Most of them were armed in vests. We had three of our officers surrounded to gunpoint. One of our guys were forced against the wall. All three of them were handcuffed and walked into the casino lobby,” said Steve Jones, a manager at the casino.

Sheriff John Anderson, who said that he had been concerned for some time about escalating tensions between the two parties, evacuated around 500 people from the casino before attempting to negotiate with the armed men.

“When they move the war into the casino, it meant we had to stop this,” he said. “We have not been getting closer to a solution. If anything, we have gotten farther away.”

Deputies were unable to make any arrests because the casino is on tribal land; however, since the federal shutdown, a restraining order and a Memorandum of Agreement is in place to keep both factions apart.

Video footage from the scene shows deputies preventing an unidentified man from taking a baggage trolley, apparently laden with documents, out of the casino.

“They’re trying to repossess or take control of the casino,” shouts another man. “These are casino documents.”

“It’s a proven fact that we have the records that they removed $11 million dollars from our account,” counters the man with the trolley. “These are our tribal gaming authority documents. The deal was that we could take the boxes.”

Vernon King, a treasurer for the ousted tribal faction, said that his group were attempting to reclaim audit information and financial documents in order to avoid the closure of the casino by the National Indian Gaming Commission. The Commission had said that it would shut down the Chukchansi unless audits were submitted; one set of accounts are reportedly a year and a half overdue. It may also face a fine of $16 million.

Meanwhile, Tex McDonald, who claimed to be the leader of the same group, said his faction was demanding control of the casino and its profits because the property and its proceeds were rightfully theirs. “They came in here about a month ago and took our casino over, and they’re illegally here. So we came in and we claimed our casino.”

While the two factions squabble among themselves, the casino, which employs 1,300 people, remains closed, with many tourists who had booked months in advance left in the lurch. And according to Madera County supervisor Tom Wheeler, the closure is having a “devastating impact” on the local economy.

US District Judge Lawrence O’Neill set no date for the possible reopening of the casino, but scheduled a hearing to take place later this week.