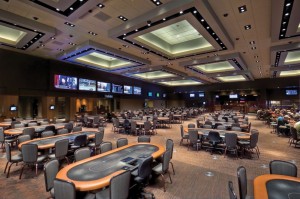 The 10th Annual Arizona State Poker Championship is less than two weeks away, and Talking Stick Resort in Scottsdale is ready for the onslaught of poker players for its Main Event.

Players descend upon Arizona from all over the United States, and sometimes further, in order to play the largest poker tournament of the year in Arizona. It has become a tremendously popular event, as past years’ tournaments have drawn some of the biggest names in the game.

The Main Event of the 2014 Arizona State Poker Championship will begin on August 15 and run through August 19. The Arena Poker Room at Talking Stick Resort will host the action. The buy-in is $1,100, and the prize pool has a $1.1 million guarantee.

The No Limit Hold’em tournament will offer three starting days, with Day 1A on Friday, August 15; Day 1B on Saturday, August 16; and Day 1C on Sunday, August 17. Each day’s play starts at 9:00 am and will run for approximately 12 hours per day.

Players are allowed to reenter on subsequent starting days, meaning each player can buy in on each Day 1 for $1,100 each time. Registration each day is open until the end of the first break. There is also the option of buying an extra 10,000 tournament chips for $30, and that must be done prior to playing the first hand of the day. That bonus buy can take place once per buy-in.

Play is scheduled to thin the field on Day 2, which will be Monday, August 18, and attempt to play down to the final 10 players. The 10-handed final table will then begin at 10:00 am on Tuesday, August 19, and continue until a winner is determined.

The championship bracelet is being designed by Scott Guathier this year.

Players who attend the event in 2014 can look forward to staying at the AAA-rated four-diamond property of Talking Stick Resort, which includes a massive casino, 36-hole championship golf course, spa, and six top-notch restaurants.

In addition to many activities surrounding the poker tournament, players can get in on some of the other tournaments or satellites going on at the Arena Poker Room. Super satellites for the Arizona State Poker Championship Main Event are scheduled for August 10 and 14 at 11:15 am each day, and one seat will be awarded for every 10 paid entries to the satellites.