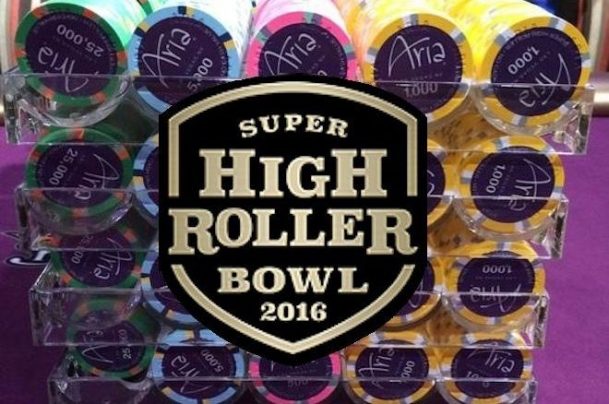 The Aria Super High Roller Bowl 2016 is now down to its final day, with $5 million to be handed out to the winner by end of day on June 1.  (Image:  pokernews.com)

Even as the 47th annual World Series of Poker begins officially today with its Casino Employee event, the Aria Super High Roller Bowl is a day away from conclusion.

Forty-nine players ponied up $300,000 for a chance to win $5 million. The tournament is now down to its final seven, each guaranteed to cash.

The 8th place finisher, Dan Smith, is the unfortunate Bubble Boy. He spent most of Day Three with a sizeable chip stack, but ran set-under-set against Rainer Kempe late in the day. Hands such as those are nearly impossible to get away from, and thus virtually guaranteed to result in losing a ton of chips.

After that tragic hand, Smith was down to just a few big blinds. He did eventually double up, but was still stuck with a small stack before surrendering it all to Fedor Holz.

That left the tournament with the seven remaining players. They are (in order of chip stack size): Rainer Kempe, Fedor Holz, Bryn Kenney, Dan Shak, Matt Berkey, Erik Seidel, and Phil Hellmuth. Not too shabby a lineup at all.

And yup, the Poker Brat is still alive and has cashed in yet another major poker event. The 14-time WSOP bracelet winner has been up and down throughout the past three days. With the smallest stack heading into Day Four, Hellmuth will need some of his patented “white magic” to pull it off.

Play resumes at 3 pm PT at the Rio in Las Vegas. Coverage will begin on Poker Central’s Twitch live streaming page for the first hour. Then it shifts to CBS Sports Network until a winner is crowned.

When play began on Wednesday, there were 16 players left in the field. Tom Marchese was the first to go early on, when Jason Mercier busted him.

Stock trader Dan Perper showed that a talented amateur can compete with the top pros, but ran into Holz’s pocket aces when he shoved his small stack all-in w KQ. Perper finished in 15th place, just eight spots shy of the money.

Big-name players like Phil Galfond, Bill Perkins, Phil Laak, Ben Lamb, Andrew Robl, and Jason Mercier were next up to hit the rail before Smith bubbled.

Smith’s set-under-set was, far and away, the sickest hand of the tournament. But there were a few other key moments which led us to the final seven players.

Not too long before that hand, Jason Mercier found himself in an unfortunate situation when his cowboys ran smack dab into Bryn Kenney’s aces. There’s seldom a way for any poker player to avoid getting it all-in in that spot. Mercier can hold his head high knowing he outlasted his Twitter rival Doug Polk, anyway.

Phil Galfond was short-stacked midway through the day and finally found an opportunity to put all his chips in the pot w AK. But he was unable to win a race against Mercier’s pocket tens.

Not only does Wednesday mark the conclusion of the Aria Super High Roller Bowl, it’s also the start of the 2016 World Series of Poker.

A few new WSOP events to look for include the $1,000 WSOP.com Top Up Turbo no-limit hold’em tournament on June 5, the $888 Crazy Eights event on July 2 (for which CardsChat has a team entered), and the July 6 $1,000 tag team competition.

We’ll be bringing you daily recaps, so check into CardsChat throughout the Series.

Was really cool to watch it on twitch. 🙂