The Super High Roller Bowl at the Aria Resort and Casino in Las Vegas kicked off Sunday afternoon. Day One, as expected, saw some fireworks between some of the game’s most talented players, including the often-blustery Phil Hellmuth. 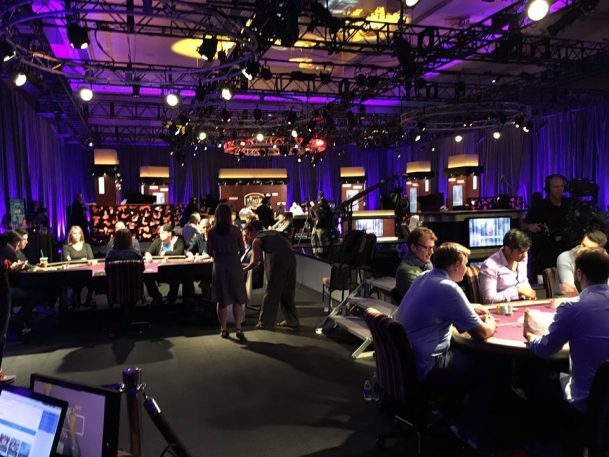 As play began in the Aria $300,000 Super High Roller Bowl on Sunday, many of poker’s brightest stars were on hand, including Daniel Negreanu, Phil Hellmuth, and Antonio Esfandiari. (Image: CardsChat news exclusive)

The 49 competitors started with 300,000 chips apiece, while vying for a shot at a $5 million payday. After one day of play, 35 of those players, who had ponied up the $300,000 entrance fee, remain. But none are in better shape than the young and talented Timofey Kuznetsov.

The Russian sits atop the leaderboard with 1,129,500 chips, nearly 400,000 more than Matt Berkey’s second-place chip stack. This tournament appears to be his event, being that Kuznetzov swept first at the Super High Roller 7 $50K NL event at Aria just a few days ago, and previously took fourth at the pricier buyin of the same event he’s now leading for a whopping $2,150,000 in 2015.

Speaking of last year’s event, the defending champion Brian Rast also has a healthy chip stack at start of Day Two (535,000). His heads-up opponent a year ago, Scott Seiver, was sent to the rail well before the end of Day One, however.

Seiver wasn’t the only one to have his $5 million dream shattered on Sunday. Thirteen other players were sent packing as well, including Antonio Esfandiari, who was the first to go early in the session.

The Magician didn’t even make it through the first level when he lost a race to his close friend Brian Rast. The former Big One for One Drop champion will have to wait some more for another major tournament win.

Another young Russian, Igor Kurganov, was the second casualty. In a hand with Dan Smith, Kurganov hit top pair on the river, but that card gave Smith a full house. Smith shoved all-in and Kurganov determined he had to make the call with a small stack.

Jason Mercier and Doug Polk have been feuding recently on Twitter over which player is better. Polk went so far as to essentially say Mercier isn’t any good at poker.

The two were seated at the same table all day, but it was Polk who headed to the rail to close out Day One, while Mercier and his allegedly inferior game moved on to Day Two with a big chip stack. Round One:  Jason Mercier.

Some of the greatest players of all-time remain in the Super High Roller Bowl, including Daniel Negreanu. Kid Poker’s stack was consistently on the rise during Day One. He finished the day with 653,500 chips.

Phil Hellmuth is also alive and well after a roller coaster first day. He got off to a slow start, then made a run, lost a big pot to Justin Bonomo, and then finished the day with a healthy 403,000 chip stack. Wearing a super tight Golden State Warriors jersey with his name on the back, Hellmuth was up to his usual “bratty” self at times. 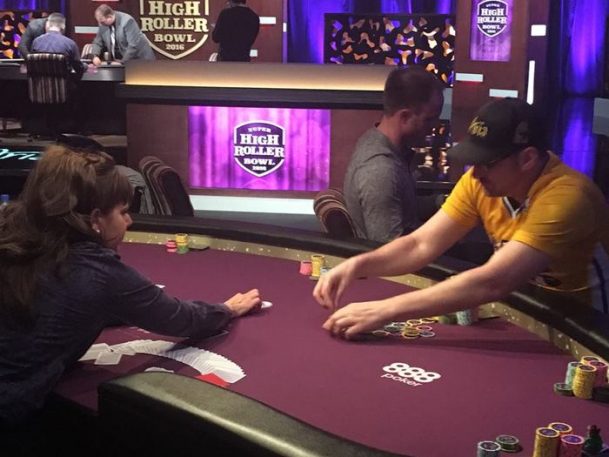 Erik Seidel had an up-and-down day as well. He got off to a rough start early on, even dipping down to around 120,000 in chips at one point. But he picked himself up off the mat and finished with 396,500 chips.

Dan Colman, Phil Galfond, Phil Laak, and Fedor Holz are some other notable names who did well on Day One.

You can catch Day Two today, May 30, on Poker Central’s Twitch from 5 to 8 pm EST. The coverage then switches to CBS Sports Network at 8 pm EST.