Ari Engel entered the final table at the Bicycle Casino’s Mega Millions on Thursday with the second biggest stack and the most impressive tournament resume, and left the Bike with his 26th career victory and $315,142. 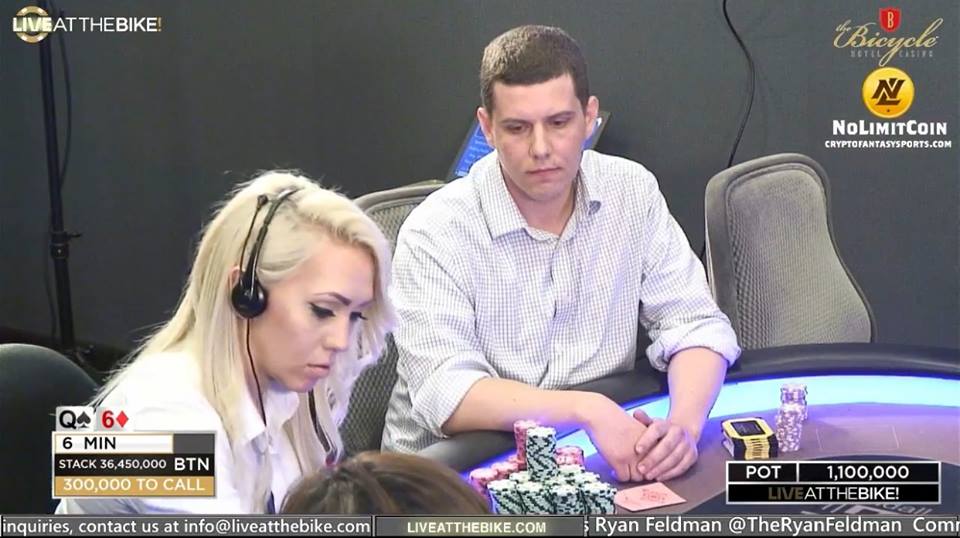 The final table aired on Thursday’s “Live at the Bike,” and Engel quickly became the crowd favorite.

After more than five hours of play, these two were the only ones left standing (sitting, technically).

The heads-up match pitted an experienced tournament player (Engel) versus an unknown on the tournament scene (Zhang), and the accomplished professional had more than a 2-1 chip advantage thanks to David Marshall, the 3rd place finisher, punting off his entire stack with K♠J♥ pre-fop against Engel’s pocket 10s. The best hand held up.

Zhang got off to a quick start in heads-up play, flopping two-pair. But, as she did far too often during this match, she under-bet the pot and, as you might say, Min didn’t get max.

Ryan Feldman, a commentator on “Live at the Bike,” continually criticized Min’s bet-sizing. Her three-bet sizes were too small, usually barely more than a min-raise, which allowed Engel to see cheap flops.

Against a skilled player such as Engel, who has nearly $6 million in lifetime live tournament winnings, including a 2016 Aussie Millions Main Event title for $1.1 million, you have to get maximum value on the big hands you hit and you can’t repeatedly make small bets for value.

Zhang didn’t follow that strategy and, as a result, she never took a run at Engel’s chip lead. And, to top that off, she got a bit unlucky on the final hand, a hand she again used odd bet-sizing.

With blinds at 300k/600k, Engel opened to 1.7 million and Zhang made her standard small three-bet to 3.6 million, barely more than a min-raise. Her opponent called.

The flop came out 5♠5♦3♥, a dream scenario for Engel who had nearly a 2-1 chip lead at the time. Zhang led out for 5 million and got a call.

The 9♦ on the turn was no help to either player. Min again fired out a 5 million-chip bet with 31 million behind, a small bet into a 17 million-chip pot. Engel was done slow-playing his trips raised it up to 11.5 million, and his opponent quickly called.

Immediately after the 10♥ turned over on the river, Zhang made a curious bet of 5 million with 40 million in the pot. Engel then put in a raise that confused the commentators, bumping it up to 17 million, an odd decision when his opponent only had a total of 24 million chips.

Zhang then put her remaining chips in the pot and Engel made the call, turning his hand over to show her the bad news. Game over.

Brutal final hand, but anyway – Min setup such suck out already beforehand with her style of play!
I really hope she is just entering high level poker and will analyze her mistakes in the game :top:

You gotta check call ( or check fold if you can mange it ) after getting raised on the turn . Even after the river raise Zhang could have had some chips left by just calling .