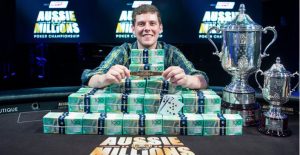 Ari Engel topped an epic Aussie Millions Main Event at the Crown Casino in Melbourne, Australia over the weekend. The Canadian took home the equivalent of US$1,120,110 in Aussie cash, the biggest score of his career, following a tough and lengthy heads-up battle with Tony Dunst.

A healthy 732 players turned out for the event, the largest since 2010 and the fourth-largest in the event’s 19-year history.

For Engel, it was a triumphant return to the city of his childhood. The son of an Orthodox rabbi, he was born in Toronto, but left Canada for Melbourne at three years old, where he remained until he was 11.

“I’m kind of speechless,” he added.

The player who first found fame online before Black Friday as the legendary “BodogAri,” when he was known as one of the highest volume tournament grinders on the Internet, began the final table with a big chip lead.

Six players stood in his way. As well as Dunst, there was up-and-coming American Samantha Abernathy, who along with Taiwan’s Kitty Kuo was one of two women at the final table.

While Engel and Dunst wielded their big stacks and players hit the rail, Abernathy clung on, short-stacked, to finish third for $625,000, the biggest score by a woman in the event’s history.

As the final two faced off, Dunst had wrestled the chip advantage from Engel, but this was to be a marathon war of attrition, lasting almost five hours.

Ultimately the match came down to two hero calls, one successful, the other… not so much.

Just four hands later, it was Dunst facing a difficult river call with fourth pair. Presented with an over-bet shove from Engel on a 10s4d2h7cJh board, and holding Ac4c, Dunst tanked himself into a call, only to find his opponent was holding top pair with J-7.

Engel, formerly the top online tournament player in the world, has led a nomadic existence since Black Friday disrupted his Internet play over four years ago. Since 2011, he’s been traveling the world, going wherever the game takes him.

It must be a good feeling, then, to win the biggest score of his life in a city he once called home.

“It feels awesome!” he confirmed.

Very interesting, what will say his orthodox father on it?

Only seven players returned on Saturday for the Final table of the tournament, which had reserved 1.6 million Australian dollars for the eventual winner. Tony Dunst, who works for the World Poker Tour, came as maximum candidate and managed to reach the heads-up, but it could do nothing against the game of Engel, who captured a new title for his case.