Ari Engel only seems to win. With his victory this past weekend over a 495-player field in the Mid-States Poker Tour (MSPT) Potawatomi Hotel & Casino in downtown Milwaukee, Wisconsin, Engel notched his 22nd career win. He also took home a $114,876 first-place prize and 1,500 Player of the Year points. 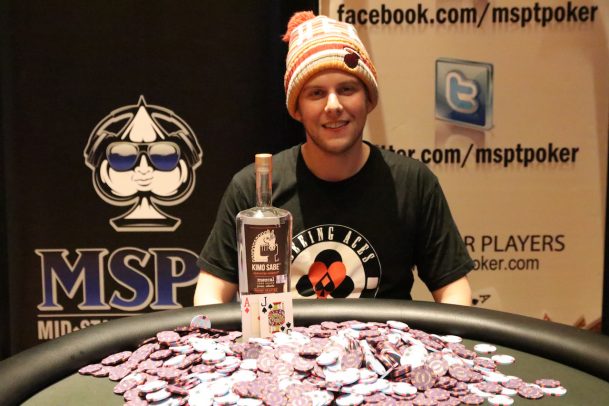 By winning the MSPT Potawatomi this past weekend, Ari Engel notched his 22nd tournament win and brought his live earnings up to nearly $4.6 million. (Image: MSPT)

The win marked Engel’s second victory of the year so far after he took down the PokerStars Championship Panama Event #34: $1,100 No-Limit Hold’em 6-Max last month. He’s also known for winning the 2016 Aussie Millions Main Event for a career-high $1,120,110 and capturing eight World Series of Poker Circuit rings. In addition to all that, he has APPT, HPT, Borgata, and SHRPO titles under his belt.

His MSPT win marked his first cash on that tour, and it only came because Engel, who earlier this year won an American Poker Award for “Tournament Performance of the Year,” was limited in what he could play this past weekend.

“There’s a Jewish holiday [Passover] that starts tomorrow night, so I didn’t want to play any tournament that went into Monday,” Engel told tournament officials after the win. “That excluded some tournaments. I was looking around and this looked like a good one. I was in Florida last week, went to the WSOP Circuit in Council Bluffs for one day, and then came here.”

Engel doesn’t have a home, instead spending the past few years living out of a suitcase traveling from stop to stop. So, what’s next for the poker vagabond?

“I’m going back to Florida for the holiday with the parents, and then I’m in the tank between going to England for the partypoker Nottingham series of the WSOP Circuit in Cherokee,” he said.

The final table ended up being what many were calling the toughest final table in MSPT history. It included not only Engel, but also reigning MSPT Player of the Year Rich Alsup, WSOP bracelet winner Alex Ziskin, poker pro Jim Juvancic, and MSPT Season 7 Meskwaki champ Keith Heine, who had made a MSPT final table just two weeks earlier.

Hein exited in third place after his king-four failed to get there against the ace-eight of Minnesota’s Carlos Monteiro. Heine earned 1,200 points toward the MSPT Season 8 Kimo Sabe Mezcal Player of the Year race, which along with the 1,000 points he got in the MSPT’s 100th Main Event, put him atop the POY leaderboard with 2,200 total points.

With that, Monteiro had to settle for runner-up and a $69,405 consolation prize, while Engel etched his name in MSPT history. Season 8 of the MSPT will continue April 21-30 at Canterbury Park in Shakopee, Minnesota, which is minutes south of the Twin Cities.