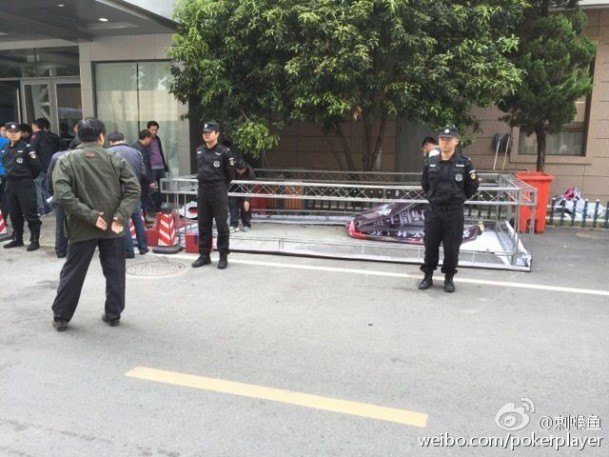 Police prevented entrance to the building hosting the APPT Nanjing Millions after raiding the tournament on mainland China on Friday. (Image: weibo.com/pokerplayer)

The Nanjing Millions poker tournament was abruptly shut down by Chinese National Police on Friday, placing doubt on the short-term future of live poker tournaments on the Chinese mainland. The tournament, part of the Asia Pacific Poker Tour (APPT), was scheduled to run from April 14-19 in the Jiangsu Wutaishan Sports Center.

According to a report in World Gaming Magazine (WGM), the festival was well underway before the raid. It was seemingly a success, as the APPT had added an additional Day 1 flight for the Main Event, and more than 2,300 people in total had registered for the tournament.

The Nanjing Millions was being run in conjunction with PokerStars Macau and the Star Poker Club. But on Friday, Chinese National Police raided the tournament and blocked entrance to the building.

“Due to the APPT Nanjing Millions tournament being suspected of illegal gambling, the police are now investigating and the event is being ceased,” read a sign placed on the door of the Sports Center. “All related staff should go and register at the designated location and cooperate with the police for the investigation.”

At the time of this writing, there had been no comment from APPT or PokerStars Macau officials, and it was unclear if there were any arrests related to the raid. However, WGM reported that the office being used by tournament organizers was seized and surrounded by police in the aftermath of the raid.

Running poker tournaments in mainland China has always been a tricky and potentially dangerous business. In order to legally run an event, there are many regulatory hurdles that must be overcome. This hasn’t always stopped events from taking place: after all, the World Poker Tour has successfully held events in China, and the APPT has previously run the Beijing Millions and the Beijing Cup without incident.

But the Asian Poker Tour had to postpone APT China in 2014 after the organization had difficulties in getting the proper approvals for its event. Almost all gambling in mainland China is illegal, though some poker tournaments have been given government approval from time to time.

That seemed to be the case this time, as organizers referred to the tournament as a “government-supported event” when promoting it.

While it’s impossible to say at this point why police decided to raid the tournament, the current anti-corruption drive in China could be a factor. That has led to measures that have cut the flow of money from the mainland to Macau, and might have contributed to a climate where (fairly or unfairly) police were looking for anything illegal that might be going on at or around the Nanjing Millions.

Attracted Players From Across China

Given its location, organizers had hoped that the Nanjing Millions would be a major event that could help advance poker in mainland China.

“The growth of poker in China has been tremendous and we are committed to support this sport throughout the region,” APPT President Danny McDonagh said when the tournament was first announced.

“Nanjing is a key location that allows players from all over the country to participate. The previous two Beijing events last year were very successful and we are proud to be a part of this government-supported event.”

governmet supported Event ? haha now we all know how it was supported by so called government. that so called same government shut it down

Whenever I become irritated with the corruption that we deal with in the states I just think of China for a moment and then I feel a little bit better..