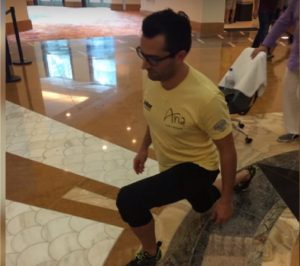 Call of Nature: Antonio Esfandiari lunging around at the PCA shortly before he was ejected from the tournament. (Image: pokernews.com)

Antonio Esfandiari’s departure from the PCA Main Event on Sunday has had the poker forums in a spin.

First there was bewilderment, as initial reports stated that the world-famous One Drop winner had been excluded from the tournament for “a serious breach of tournament etiquette.”

Then came disbelief, as news of his actual misdemeanor filtered through. Esfandiari, it seems, was expelled from the tournament for urinating into a bottle, under the table, during play, in what we can only classify as the newest version of “live streaming.”

Then came yet more confusion. Why had he done it? Had the Magician finally blown his cool? Or was it a conjuring trick gone horribly wrong?

The answer, as we might have guessed, is that there was a prop bet involved.

“I have a 48-hour bet with Bill Perkins, where every time I move my body, I have to lunge,” Esfandiari had explained to PokerNews, shortly before the Pee-Gate incident went down.

This was the sole means by which the Magician could transport his slender, designer sportswear-clad frame from Point A to B for a whole 48 hours, and it proved to be tougher than he had expected.

“My legs are on fire,” he told PokerNews.

Yes, despite a pain-minimizing diet consisting of ibuprofen and salt water, plus an extensive pre-bet yoga work out, Antonio was feeling a bit wonky, having lunged his way to the casino that morning.

“What I didn’t realize is that, after all the lunges it took to get here, my legs would feel like putty,” he said. “I literally couldn’t move. I wasn’t prepared to lose the bet, so I did what I had to do.

“All day and night I’d been planning and thinking about what I was going to do to win this bet. Looking back, I realize that I didn’t look at the bigger picture, and I made a mistake … My actions were totally out of line and unacceptable. I got so caught up in winning the bet,” Antonio told PokerNews.

The “bigger picture” in this arena is something most of us master at around three years old, but we digress.

No Such Thing as a Free Lunge

Esfandiari declined to disclose the sum of money involved, but when you consider the level of public humiliation, we suspect it must be quite a lot. As one forum poster put it: “It’s gotta be like 100k or Antonio wouldn’t have risked pulling his d out.”

Meanwhile, according to another 2+2 poster, this was all Amaya’s fault:

“It’s one thing for Amaya to turn its back on the SNE grinders who have been mainstays on Pokerstars for years,” he complained, “but when you find yourself disqualifying one of the poker world’s most special snowflakes from one of your biggest tournaments it’s clear you’ve lost your way.”

Politics aside, tournament organizers ultimately deemed Esfandiairi’s actions beyond the pale. And, having been given his marching orders, there was little for the Magician to do but apologize, shrug, pick up his bottle of pee, and lunge off awkwardly into the Bahama sunset.

Sometimes, when you gotta go, you just gotta go…

Dirty man keep your ding dong in your pants or wear diaper please.