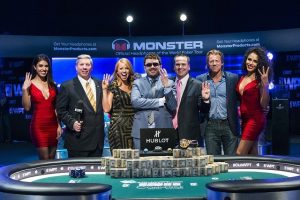 Anthony Zinno has had quite the season on the World Poker Tour.

While he won an event on tour last season, this year he far surpassed that by winning back-to-back titles at the 2015 Fallsview Poker Classic and the 2015 LA Poker Classic, showing himself to be one of the top tournament players on the circuit today.

Those and other results were enough to earn Zinno the title of WPT Season XIII Player of the Year.

The title was officially confirmed on Day 2 of the World Poker Tour World Championship, when Darren Elias was eliminated from the tournament at the Borgata.

Elias was the last player with any chance to catch Zinno, and his bust out ensured that the honor would go to Zinno.

Those two were the clear choices to compete for Player of the Year. Zinno has been a dominating force throughout the season, scoring five other cashes to go along with his two victories.

Incredibly, however, Elias had also scored back-to-back titles earlier in the season, winning both the Borgata Poker Open and the WPT Caribbean tournaments. He backed up his wins with six other cashes.

In total, Zinno has won more than $1.4 million this season on the WPT; Elias had also won a little over $1 million, and his eight cashes for the season set a new WPT record.

In the end, though, the Global Poker Index formula used to determine the winner found Zinno to be the top player of the season.

Zinno received a unique timepiece from award sponsor Hublot, and will also receive a few other perks in the coming season, including accommodations at each WPT Main Tour stop and some additional support in terms of transportation and food at many events.

Given the nature of their successes, and the fact that a GPI formula was used to determine the WPT player of the year, it’s not surprising to see both of the top finishers near the peak in the overall GPI rankings as well.

Zinno is currently in 13th place, while Elias is right behind him in 17th. Currently, Ole Schemion leads the GPI rankings; the German pro has sat atop the standings for a record 18 consecutive weeks.

Zinno Among Leaders in Most Player of the Year Races

Zinno’s success hasn’t been confined to just the WPT, either. Earlier this month, he finished second at an event at the Seminole Hard Rock Poker Showdown, and in March, he won a $25,000 buy-in High Roller tournament at the WPT Bay 101 Shooting Stars event.

Combined with his two WPT Main Event titles, this has given Zinno one of the hottest starts to 2015 of anyone in the poker world.

Overall, Zinno has $3.1 million in career winnings and three World Poker Tour titles. He is only the third player to win three titles on the WPT, joining Gus Hansen and Carlos Mortensen.