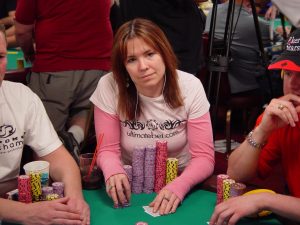 Annie Duke, a former professional poker player, is hosting a Poker Ball with actor Hank Azaria on Saturday, October 6 in Philadelphia. The event, which is now sold out, will take place at The Union League, an elite members-only social club.

All net proceeds go to How I Decide, a Pennsylvania charity working to transform education by equipping youth with critical thinking and decision-making skills. According to the organization’s website, the focus of the nonprofit is to help students in urban and disadvantaged communities in Philadelphia.

The charity event will include a poker tournament, cocktails, buffet dinner, blackjack, raffles, and poker instruction by Duke. The winner of the tournament will receive six hours of private jet time.

Azaria, best known for playing the voice of numerous characters on The Simpsons television show, is an avid poker player. In 2015, he competed in the Super High Roller Celebrity Shootout at the Aria in Las Vegas.

He lost heads-up to Kevin Pollak for a chance to compete against poker pro Vanessa Selbst for a $1 million prize. Selbst ended up defeating Pollak in a surprisingly competitive match.

This isn’t the first time Azaria has taken part in a charity poker event. In 2011, he turned his entire backyard into a giant poker room to host a poker tournament which benefited charities that help underprivileged youth.

He will also join Selbst and Daniel Negreanu to participate in the “Justice is Blinds” poker tournament to benefit the Urban Justice Center of New York on September 27.

Annie Duke, Howard Lederer’s sister, is also no stranger to the game of poker. Once a regular on poker TV shows earlier this century, Annie is now a professional speaker and author.

She didn’t leave the poker world under her own volition. After secret tapes were released in 2013 by a person connected to the Ultimate Bet, a former poker site Duke represented, she was accused of being part of a cheating scandal that involved former WSOP Main Event winner Russ Hamilton.

Phil Hellmuth, another UB poker pro, was also mentioned in the tapes. But he never took much flack from the poker community. Duke, on the other hand, has never been forgiven and probably never will. It’s unknown exactly why Hellmuth got off lightly compared to Duke.

But it could have to do with Duke being related to Lederer, another poker pro involved in an online poker scandal.

Until this past summer, Lederer had been absent from the poker community, save for a few cash game sessions in Las Vegas, since Black Friday in 2011. His sister still hasn’t returned to the poker world, although she still proudly proclaims to be a WSOP bracelet winner in her Twitter bio.

She Always Had Critics

Duke, even before the UB scandal, had some critics in the poker world, especially Daniel Negreanu and Jennifer Harman. Negreanu’s beef with Annie dates back to his early days as a poker grinder in Las Vegas. He despised her for what he claims is poor poker etiquette.

Lederer returned to the poker world to play in some WSOP events this summer. Will his sister get back in the game someday? If so, apologizing to the poker community first might be a good idea.

look at this .. cheater and fraudster again came back and people are supporting by tix sold out ? so disgusting .. these people should be stamped out from poker for ever

Sickening. I threw up a little bit as soon as I saw her name in the headline.