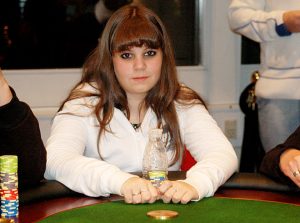 Annette Obrestad was once known as something of a superhero to the online poker community. In her online prime, the self-confident young woman also came to represent the fresh face of women in poker: fearless, insightful, and able to hold her own at a table full of guys, whether virtual or land-based.

But her latest appointment as the new face of the Las Vegas Venetian’s poker room may not be quite as well received, given that Sheldon Adelson, the world’s most vehement anti-online poker lobbyist, owns the place. Local pros weren’t too thrilled either, based on a series of Tweets, particularly from room regular Kathy Liebert, directed at Obrestad and the Venetian management.

Of course, Adelson may not have had direct input into Obrestad’s selection, but it’s not like anyone in the Venetian’s management team would be unaware of how odd this could look. Everyone and their mother knows by now how vehemently opposed the Las Vegas Sands CEO is to online poker.

Obrestad made a name for herself in 2007 when she won the World Series of Poker Europe Main Event the day before she turned 19. She is still the youngest WSOP bracelet winner ever.

Her credentials also include a successful online poker career, where she famously built a hefty bankroll without making a deposit.

Kathy Liebert, a member of the Women in Poker Hall of Fame, was noticeably upset about the selection of Obrestad, and she felt moved to Tweet about it, too. Liebert frequents the Venetian poker room and apparently, Obrestad doesn’t, at least according to Liebert.

“That is weird,” Liebert said in response to a post announcing Obrestad’s new role from the Venetian poker room Twitter account. “Does she live in Vegas now?”

It turns out that Obrestad does live in Las Vegas now, but Liebert said she has never seen her at the Venetian. Obrestad responded by saying she plays deepstack events from “time to time,” referring to the Venetian’s popular Deepstack poker tournaments.

Obrestad also informed Liebert that she had played at the Venetian “a ton” a couple of years ago. Liebert didn’t seem to believe her, saying she has never seen her play there, while noting she has seen former WSOP Main Event champ Carlos Mortensen there plenty of times.

What Have You Done for Me Lately?

Judging by comments from poker players on Twitter, Annette Obrestad is an odd choice for ambassador of one of the world’s most popular brick-and-mortar poker rooms. A few years back, she was considered one of the top female poker players in the world, if not the best. But she’s fallen off the map in recent years.

But unlike Stephensen, Obrestad won her money in numerous events. For Stephensen, $5.1 million of his $5.5 million career winnings came in that 2014 WSOP Main Event.

Liebert is upset that a non-regular was named ambassador at Venetian, while others in the poker community have referred to Obrestad as “past her prime”. She hasn’t scored a big cash since 2013.

Although she claims to have played in Deepstack events prior to being named ambassador, Obrestad doesn’t have a cash in any of those. And no doubt plenty of players also remember that she was once the face of Lock Poker, and reportedly continued to represent for the site even after she found out that many players were having major withdrawal issues for their bankrolls on the site.

Eventually, she too was dropped, when the well completely ran dry at Lock.

Hope she plays more and gets a better profile for herself and the business. Good Luck

She should be shamed and run out of there. She took money fron Lock and brought new players to the site even when she knew they weren’t paying people. She’s also not a nice person. She berates fish when they get lucky and she is hateful and ugly when losing. Terrible choice for ambassador of a poker room. Lienert is an honorable person and wouldn’t call her out without a very good reason.