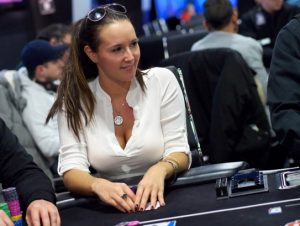 Professional poker player Anna Khait has become the fifth person to be voted off the island of Kaôh Rōng on the 32nd season of Survivor.

Among those joining Khait on the show was the likes of former NBA player Scot Pollard, ex-Big Brother contestant Caleb Reynolds and Joe Del Campo a former FBI agent.

Before she was dumped on the island and forced to survive alongside a group of (mostly) narcissistic egomaniacs, she told CardPlayer that her poker skills should come in handy on the show.

After witnessing Vanessa Rousso use her knowledge of poker and game theory to finish third in the last season US Big Brother, Khait was hoping to use her ability to analyze and evolve to her advantage.

“A big thing in Survivor and poker is adjusting. There is definitely some slow playing involved,” explained Khait.

Unfortunately, her tactic of flying under the radar didn’t work as she was called out on her bluffs one too many times and eventually faced the dreaded tribal swap in the latest episode of the show.

With the group split into three faction – Brains, Beauty and Brawn – Khait was forced to split from Julia Sokolowski and Michele Fitzgerald and join the Gondol tribe.

With her position as the newbie in the group making her vulnerable, she was eventually voted off after her team failed to win the immunity challenge.

A Game of Luck and Skill

Talking to Parade after the show aired, Khait acknowledged the fine line between luck and skill in the game.

“There’s a lot of skill required, but there’s also a lot of luck, just like in poker. You have to balance how to make the best decisions, and sometimes, there’s just nothing you can do but try your best,” said Khait.

As well as coming up short in her season of the show, Khait also failed to beat another poker playing ex-Survivor contestant, Jean-Robert Bellande.

Bellande took part in Survivor China and managed to last 24 days before getting the chop in 9th place (out of 16). However, it’s something of a miracle that he lasted that long as he received the most votes out of everyone on the show and was voted for at least once during every Tribal Council.

While there wasn’t quite as much dislike for Khait, she still couldn’t make it to the final but now her eviction has been aired she’s free to put the experience behind her and focus on the World Series of Poker.

Before taking part in the show she told CardPlayer that she had upped her activity on the live tournament circuit, despite the fact she makes “most of [her] money playing cash.”