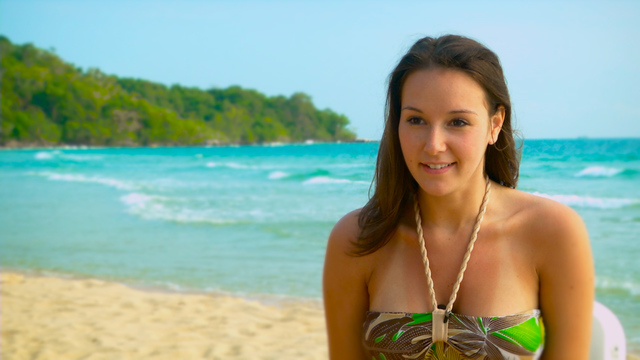 Anna Khait, a 27-year old Brooklyn resident, is a regular at Atlantic City poker rooms. Last spring, she stepped away from the felt and headed to an island in Cambodia to compete on the popular television series Survivor. That series is just now airing on CBS.

Now in it 32nd season, this year’s Survivor contestants will be competing for the $1 million prize, and Khait seems to have a shot at winning.

The reality-based game show takes place in isolated areas and in the wilderness in places all around the world. Contestants participate in some intense competitions, all in the name of that million-dollar carrot at the end of the game.

Although the series was filmed nearly a year ago, contestants contractually can’t disclose the outcome before it airs. The world will soon find out which of the 18 competitors won at the end of the aired television series.

Khait is expected to be in the running for the $1 million prize. She is among the favorites after a strong showing in last night’s season premiere.

Khait used her poker skills to get onto the show itself. During an audition, she spun the truth when asked what she does for a living.

“I didn’t tell anyone I was a poker player,” she told the New York Daily News. “I didn’t want anyone to know that I play a strategy game for a living, so I said I worked at the Borgata, which is true! It made people underestimate me.”

Khait didn’t get on the show only due to that bluff, however. She used her beauty to earn a spot on the show’s roster.

There are three starting teams on Survivor: Kaoh Rong: Brains (smart people), Beauty (attractive people), and Brawn (athletes). Khait is, not surprisingly, a member of the Beauty team.

As players get voted off the show weekly, the teams break up. Only one person, not a full team, can win the first-place prize money.

Anna Khait isn’t the first professional poker player to compete on Survivor. Jean-Robert Bellande was a member of Survivor: China during season 18 in 2007. And no, JRB wasn’t a member of the Beauty team.

JRB was eliminated in the eighth episode of the series, which was about halfway through the show. Early on in the show, Bellande used his poker instincts to determine Todd Herzog, the eventual winner, was a devious player.

He used his bluffing savvy to convince others he was lazy early on, as part of his strategy, which worked for a while. But, in the end, Herzog knew Bellande was his biggest threat, so he voted him off the island and sent him back to the poker table.

Survivor episodes air each Wednesday night on CBS throughout the spring.

My wife – sadly – does, so I am sometimes subjected to it, and it is like a bad car crash, I still look even tho I feel sick. In Germany there is the same show in German, and it is disgusting. The lowest of trash. I am struggling to get by financially and I would rather live in a box than degrade myself to the level the people in the show do. IDK if the American version is the same, but, gee, sad state of life if people watch this crap, IMO.

Sorry if I offend anyone ( maybe…) but I was recently subjected to this crap again, and had to leave the living room. My wife counters that I do things she finds a waste of time (hmmm, like.. uhhh.. poker? I ask) and, yea, she can watch what she wants. But minutes of my life have been stolen that I will never get back.

Really, rather flip burgers at a fast food chain for my money. I could at least avoid the feeling I would have if I let myself be degraded like the people in this show do. No self respect at all. Or just money whores.