Interview: Vlogger Andrew Neeme Takes Meetup Game on the Road to Run it Up Reno

RENO, NV–Andrew Neeme and his poker vlogging peer Brad Owen took their popular meetup cash game to Run it Up Reno on Monday evening. Even in the relatively small town of Reno, Nevada, a sizable crowd of fans packed the back room at the Peppermill poker room for some beers, banter, and a casual game of $2/$5 no-limit hold’em. 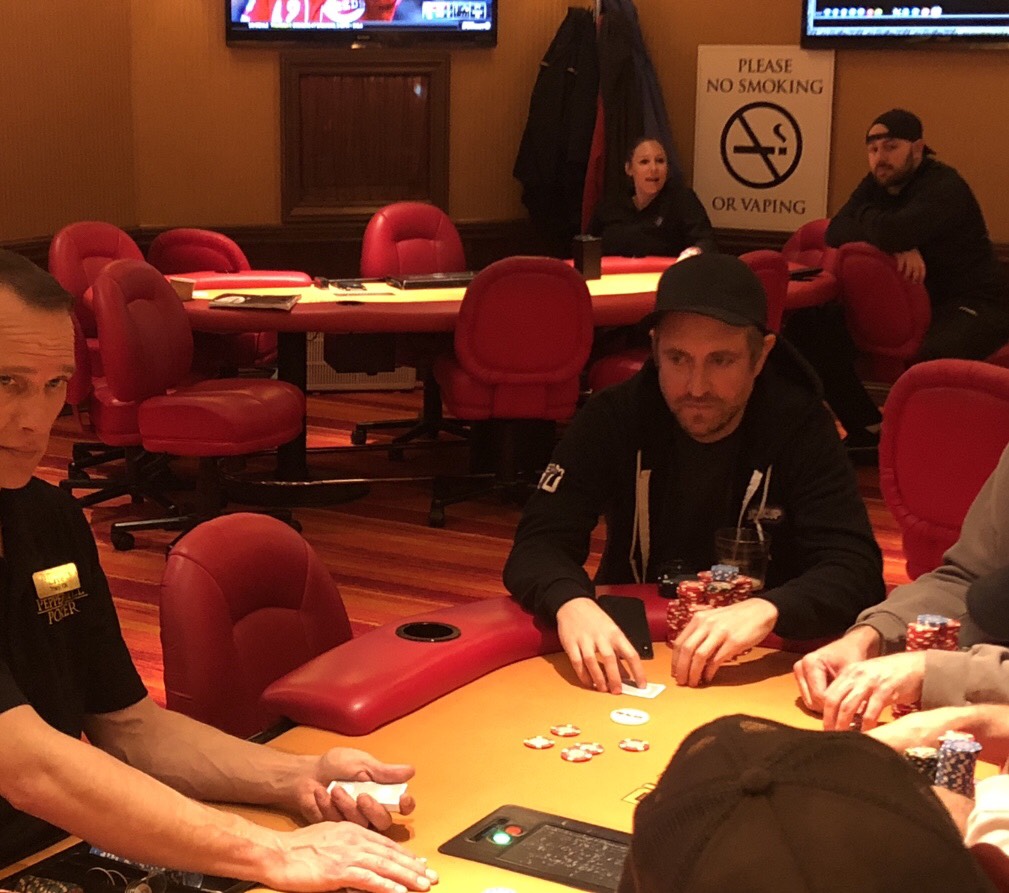 Neeme and Owen have well over 200,000 combined YouTube subscribers which is difficult to pull off in the poker niche. In comparison, vloggers Johnnie “Vibes” Moreno, Jaman Burton, and Tim “TheTrooper97” Watts, all entertaining content providers, each have less than 40,000 subscribers.

They’ve turned many of those viewers into hardcore fans. Some of whom even follow them around the country to compete in these meetup games (MUG).

One player in the game, Brian, who lives in San Diego, is a MUG regular. Andrew refers to him as the “MVP of the meetup games,” a fitting nickname for someone willing to make the 550-mile trek.

The poker session began around 6 pm and I pulled Neeme away from the table around 8:30 for an interview. He was up about $500 at the time, so he was, as you’d expect, in good spirits.

Many of us fell in love with this game during the poker boom era, back before the headphone-wearing GTO bots chowing down on quinoa and broccoli took over the card rooms.

When I first started playing cards in 2003, we stuffed our faces with greasy burgers, and table talk always kept the game lively. The meetup game at Peppermill reminded me of those glory days.

Few, if any, wore headphones. Players chatted about more than just ranges and solvers. And the casino fed everyone free beef nachos that were quite tasty and, even better, extra greasy – just the way I like it.

Evolution of the MUG

Neeme and Owen have built their co-meetup game into quite a popular regular event. They’ve hosted the games in card rooms all over the country in Baltimore, San Antonio, Las Vegas, and also Reno. He praised Monday’s host venue.

“The Peppermill is lacking nothing that we wish they incorporated in the other card rooms,” he told CardsChat. “It’s cool that we get this back room here to keep the group separate. Obviously the dealers are pros, the cocktail waitresses are on point, so it’s a great spot.” 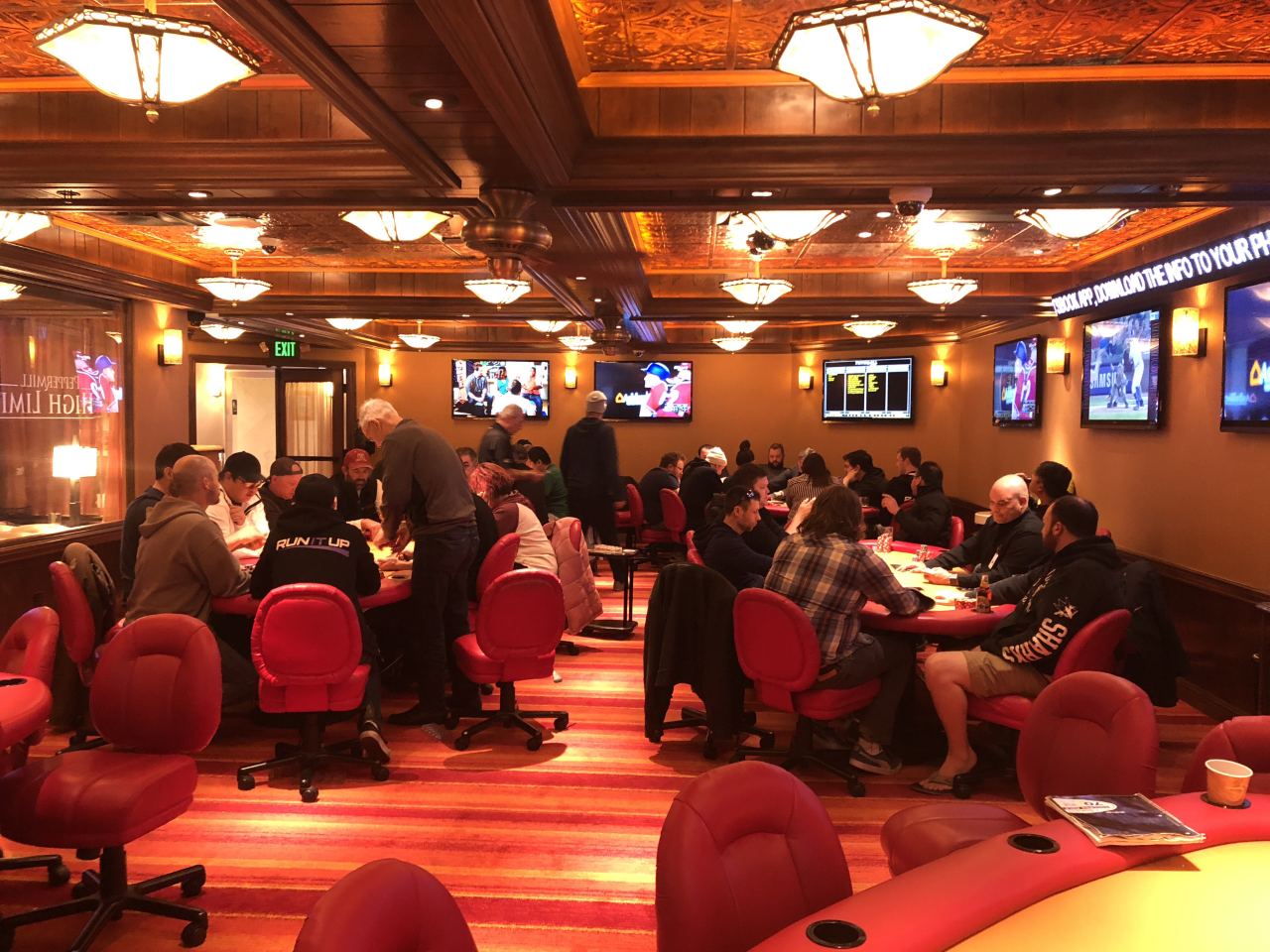 A glimpse at the meetup game at Peppermill in Reno. (Image: CardsChat News)

The game had four tables going although some players, including poker funny guy Joe Stapleton, had already gone busto and left by the time I arrived. While that’s an impressive turnout, it pales in comparison to some recent MUG’s.

“The biggest one was the Maryland Live (near Baltimore),” Neeme said. “We had 22 tables running and a waiting list. It was pretty crazy.”

Neeme said the players on Monday were “mostly (Reno) locals with other players scattered around.”

Owens and Neeme clearly have a good thing going with their vlogs and meetup games. It’s quite refreshing to watch a lively game of poker in the headphones and GTO era.

But I also know Andrew could reach a larger audience in another niche such as travel. He’s extremely talented in front of and behind the camera. And anyone who watches his vlogs knows that to be true. Poker is a relatively small niche and although he has over 114,000 YouTube subscribers and his fans flock to his MUG’s, I wondered if he considers branching outside of poker.

“Sure, definitely thought about it,” he told me. “The size of the market (in poker) is smaller than a more general topic. When you’re speaking about poker hands, you’re speaking a foreign language to a lot of people.”

But he also understands that his fans come for the poker, and he doesn’t want to scare them off.

“The thing about the poker audience is that it’s a very passionate audience. So, the people who are into it, they want to consume as much of it as they can.”

I brought up the possibility of splitting up his YouTube channel into separate channels to cover multiple niches without running off his poker fans.

“As of right now, my attention is already split in so many different ways, even within poker. We’re doing these meetup games. There’s so much travel to do with that. And I’m still making my own videos and doing the editing and playing poker itself, and I have a podcast with my fiance. So, it’s hard to also do an entirely different subject matter.”

You can catch Andrew’s podcast with his fiance, Busi, at TellsPodcast.com.

Psyched to Run it Up in Reno

Jason Somerville’s Run it Up Reno has exploded over the past couple of years. The current series of mostly low-stakes poker tournaments, is running until April 22.

Many popular poker personalities such as Chris Moneymaker, Joe Stapleton, Benj “spraggy” Spragg and, of course, Somerville, have joined Neeme, a member of Team RIU, in Reno this week. Other than having an opportunity to play with the pros, Andrew explained why Run it Up has become such a massive event.

“A lot of it just stems from Jason’s personality,” he said. “He’s always been a very positive and upbeat character. He’s not one to get into the trolling and all that stuff. And he sees that poker needs a social aspect of it to thrive.”

“I don’t think it matters if it’s in Reno or Los Angeles or New York City. I think people want to be a part of that sort of vibe.”

But it isn’t just Somerville and the other familiar faces bringing players to Peppermill for RIU. Neeme says the event is “very approachable” and the players who compete at RIU “really enjoy the game and like playing with others who enjoy the game.”

That’s the same formula Andrew and Brad use to grow the meetup games. And it’s clearly working. Perhaps, that is why Jason Somerville begged Neeme to join Team Run it Up.

Props to Andrew for continuing to grow. Everyone who has played run it up reno says how amazing it is. I would love to play it someday.