Andrew Barham became the latest PokerStars Platinum Pass winner thanks to a little bit of help from Chris Moneymaker. 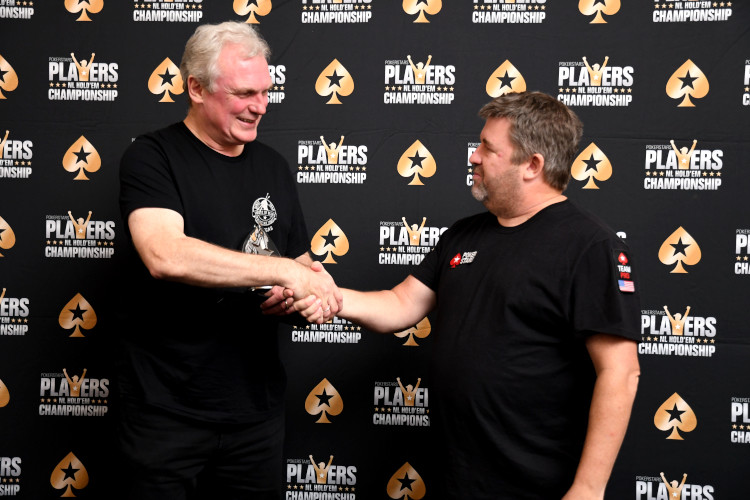 Andrew Barham has picked up a PokerStars Platinum pass after winning Moneymaker’s Road to PSPC London.

Worth €26,000/$28,800, the prize package gets the winner an all-expenses paid trip to the PokerStars Players NL Hold’em Championship (PSPC).

The first PSPC attracted 1,039 entries, but organizers are hoping for more in 2020. With Moneymaker travelling the world in search of new talent, players anted up inside London’s Le Meridian Piccadilly on Oct. 24 for their shot at the big time.

Following four starting flights and a second day of action, Barham emerged as the chip leader. With the final eight convening inside PokerStars Live at the Hippodrome Casino, Moneymaker was on hand to offer some advice.

Telling Barham to play small pots, but to keep the pressure on, the 2003 WSOP Main Event winner watched as his advice was put into action.

First to fall was Stephen Baker. After qualifying online for just $7, the Brit hit the rail when his ace-eight couldn’t overtake Justin Bateson’s ace-king.

With the floodgates open, eliminations occurred at a rapid rate. Within three hours, the final three were cutting a deal.

Baker Falls as Deals are Done

Barham and Bateson led the discussion with Jay Yerby fighting his corner as the short stack. When the talking was over, Bateson banked the biggest share of the prize pool ,but it was Barham who went on to take control.

Despite a mini comeback during which he doubled up twice, Yerby lost out when his A♥7♦ wasn’t enough against Bateson’s A♠T♥.

With two left and Barham in front, it took just one hand to bring things to a close. As Moneymaker sat down to deal, he provided Barham with a little bit more help to go along with his previous advice.

This time, however, the assistance was more direct in the form of pocket kings. Following a raise and call pre-flop, both players were all-in with the board showing 7♣4♠Q♥.

Although Bateson had outs with Q♠T♠, the 3♥ and 7♦ on the turn and river were no help.

With that, the Moneymaker’s Road to PSPC London event was over.

Speaking to reporters after his win, Barham said he’s relishing the opportunity to take on the game’s best in Barcelona.

“I love playing poker. I like to play against better players where I can. Obviously that’s not easy or cheap, but this is a great opportunity to play against the best in a fantastic event,” Barham said after his victory.

The hunt for more PokerStars Platinum Pass winners continues this week with another UK event in Newcastle. From there, Moneymaker will travel back to London for a third British showdown before taking his roadshow to Divonne-les-Bains in France.