An Imaginary Thanksgiving Dinner with the Cantankerous Poker Stars

It’s Thanksgiving dinner over at Daniel Negreanu’s house (at least in our dreams), and Will Kassouf, having been passed the cranberry sauce, is deciding what to do next. 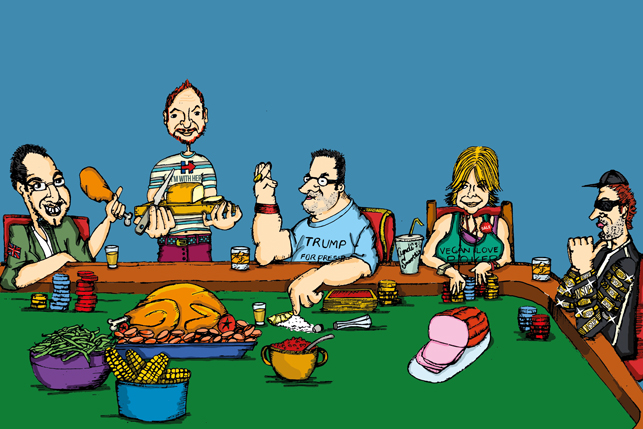 Imagine if William Kassouf, Daniel Negreanu, Mike Matusow, Cyndy Violette, and Phil Hellmuth got together for Thanksgiving dinner. And you thought your family had arguments? (Image: CardsChat exclusive)

“Maybe take some sauce and reevaluate your next move when the turkey comes out,” spits out an exasperated Mike Matusow.

Daniel arrives from the kitchen wearing an “I’m With Her” T-shirt behind his Toronto Maple Leafs apron, and carrying a steaming platter, on which lies a shapeless brown brick.

“What in the hell is that?” demands Mike, pointing at the tray.

“It’s a vegan nut roast,” smiles Daniel. “It’s healthy and delicious. Cyndy Violette prepared it for us,” he adds, speaking of his most-famous fellow vegan player and Las Vegas restaurant owner, who also happens to be in attendance for dinner today.

“Oh Jesus,” Mike groans, unconsciously dipping his fingers around in some spilled salt on the table. A reminder of the old days, when he had the good white stuff.

“Daniel, why did you invite this frickin’ guy? He doesn’t shut up,” complains Phil Hellmuth, nodding at Will. “He’s already spent seven minutes choosing a sprout and now he’s tanking on the cranberry. It’s getting cold. I think he has mental issues.

“And I don’t think they even have Thanksgiving where he comes from, northern Europe, or some frickin’ place,” the Poker Brat adds.

“William is the new king of speech play, and I’m the king of table talk, which are very different things, actually, so we’re going to get together after dinner and compare notes,” explains Daniel patiently. “It’s fascinating: Will’s play appears to be based on repeating the same six phrases over and over again, until all the players go insane and tell him to go back to his own country. Quite brilliant.”

“I invented speech play when you were in diapers, buddy,” warns Phil.

Phil explodes. It’s been a long time coming. “I don’t have to come here and listen to this. I have 14 WSOP bracelets, fourteen.”  He storms towards the exit. “Honey,” he calls, out of the front door, “Honey, start the car, we’re leaving.”

As the door slams shut behind the departed poker god, Daniel can no longer keep it together. He throws his tray to the ground, splattering residual tofu and mashed nuts everywhere

“People think I’m such a positive guy and successful guy, and I’m a celebrity, but I am only human and all I wanted was to have a nice Thanksgiving dinner. Was that too much to ask?” he demands tearfully.

“Woah,” says Will. “Friendly game, friendly game. You show, I show. I got a legitimate hand. Keep it friendly, yeah?

“And that guy is driving me CRAZY,” says Daniel.

Cyndy Violette, meanwhile, has gone into a zen trance and is imagining all the people, with nothing to kill or die for, living life in peace. She sighs and lets out a loud “Ommmmmmmmmmm,” trying to maintain spiritual homeostasis.

Choking on the Nuts

Kassouf takes a bite of the nut roast and suddenly claws at his throat. “Nut allergy,” he gasps. “Help!”

“OMG,” says Daniel. “With all that incessant talk about nuts, coconuts, and whatever, I never thought he’d have an actual nut allergy.”

“Yeah, but it was speech play,” says Mike. “That’s why the guy is smart.  He gets you to believe all kinds of stuff that isn’t true. That’s his thing.”

“Why can’t we just have a normal Thanksgiving, like a normal gathering of friends?” he asks Matusow, who is awkwardly toying with his cutlery, while riffling his chips, wishing they were made of potatoes so he could eat them.

“Good for TV, good for TV,” groans Will from the floor.

“Do you think we should call an ambulance? I think he’s having a seizure,” asks Daniel, motioning towards a writhing Kassouf.

“Nah, best to just let him sleep it off so we can all get some peace and quiet,” replies Mike.

Like any other dysfunctional gathering of friends and family on Thanksgiving, eventually everyone’s had enough liquor to start spouting off on their political views. Daniel, still wearing his Hillary shirt almost three weeks after the election didn’t go his way, says he’s guesses the Trumps will have a very UNinclusive holiday dinner.

Matusow, who is thrilled that Donald Trump pulled the surprise of all surprises with a come-from-behind win on November 8, tells Daniel to let it go already. “At least they serve real TURKEY,” he says snidely, tossing over a piece of that vegan loaf so that it falls on the floor. Even the dog won’t touch it.

“Pass the turkey,” he motions to Kassouf, who’s been bogarting the real bird for the past hour.

“I will . . . eventually,” the Brit replies, and eats his own massive bird leg for the next two minutes, while smirking.

“TIME!” yells Mike, tapping his fingers impatiently. Then he reaches across the table and grabs the bird away from Will. “Wanna call the floor over?” the Mouth smirks, and nobody can understand anything he says after that, because his mouth is full of food.