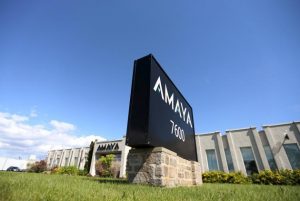 Amaya and William Hill are looking to build a diversified gambling powerhouse with cost savings of 100 million per year. (Image: Reuters)

Amaya and William Hill have confirmed they are negotiating a “merger of equals” to create “a clear international leader across online sports betting, poker and casino.” The two companies released a joint press release on Saturday in response to growing press speculation surrounding the proposed merger.

“Over recent months, the Board of William Hill has been evaluating options to accelerate William Hill’s strategy of increasing diversification by growing its digital and international businesses,” it said. “Amaya has been undertaking a review of its strategic alternatives since February 2016.

The presser also noted that while discussions were ongoing, there could be no certainty that an agreement will be reached.

While it’s crucial that companies wishing to merge have industrial synergies, some analysts have remarked that Amaya and William Hill’s similarities are of the wrong sort. Both have recently lost their CEO’s, for example, placing them in a vulnerable position.

In July, the British bookmaker ousted CEO James Henderson apparently as a result of his failure to turn around the bookmaker’s underperforming online operations. Meanwhile, Amaya Chairman and CEO David Baazov was forced to resign permanently from his position having been charged with five counts of insider trading by Quebec financial regulator AMF.

He was in the process of acquiring the company in a bid to take it private at the time he was charged and still remains its largest shareholder.

William Hill, meanwhile, was forced to rebuff a hostile takeover in August, when 888 and Rank made an unwanted bid for the company.

“As a dish, it probably needs a lot of sauce to make it palatable for shareholders,” another insider told the newspaper.

The “Right Kind” of Synergies

But there is logic to the proposal. The two companies said that cost savings stemming from the right kind of synergies are estimated to be over £100 million a year. William Hill, in particular, has been eager to pursue consolidation in order to achieve greater scale in a highly-regulated and taxed sector.

Competitors in the European market such as Betfair and Paddy Power, Ladbrokes and Gala Coral, and GVC and bwin.party have all experienced mergers over the last 12 months.

Amaya’s online expertise will enhance William Hill’s shortcomings in that area, while the Canadian PokerStars parent is determined to move successfully into the sports betting arena.