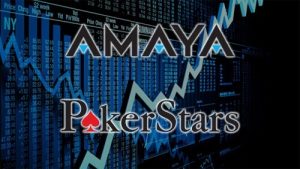 The Amaya stock buyback is likely a good thing for PokerStars and Full Tilt players, and wanna-be players. (Image: calvinayre.com)

Amaya’s volatile stock price has seen more than its share of ups and downs since the Canadian-based gaming company acquired PokerStars and Full Tilt for $4.9 billion in June of 2014.

Shareholders and market analysts have debated the value and whether the stock was a buy or sell over the last six months, but one large company in particular believes it’s a strong buy: Amaya.

The company announced this week it plans to buy back and then cancel up to five percent of its public shares in 2015, meaning Amaya will look to purchase 5.4 million common shares over a one-year period. With a current price of about $25 ($30 CAD) per share, Amaya is expecting to spend somewhere in the neighborhood of $140 million on the buyback.

In a press release issued on its corporate website, Amaya also revealed plans to sell off certain business-to-business (B2B) assets, such as the Cadillac Jack gaming portfolio.

In November, Amaya sold Ongame Network to NYX Gaming. Ongame and Cadillac Jack both provide solutions for other companies interested in running online casinos, poker rooms, and various games. Amaya says of its other B2B products, “The Corporation intends to explore various strategic opportunities to divest … The intention is to examine strategic alternatives for these B2B assets that will maximize shareholder value.”

What Does It All Mean to Players?

The announcement this week from Amaya seems to signal that the company is trying to lighten its load in order to focus more attention on its products that are actually making money.

That’s a good thing for online poker players, who have endured a rather bumpy transition. Since Amaya’s takeover of the Rational Group, parent to PokerStars and Full Tilt, it’s been one headache after another. A brief recap:

August 1, 2014: The June agreement between Amaya and Rational is completed. PokerStars founders Mark and Isai Scheinberg are immediately forced out.

October 30, 2014: PokerStars announces it will up rake charges and add currency exchange fees. The public outcry from players is loud, with many saying PokerStars will never be the same.

November 21, 2014: Lesniak blames Governor Chris Christie for the delay on bringing PokerStars to New Jersey. Residents fear the largest poker room in the world will never enter the United States.

December 12, 2014: Amaya headquarters in Montreal is raided by Quebec financial regulators looking for trading information related to its $4.9 billion deal for Rational.

January 7, 2015: After “additional analysis and consideration,” PokerStars decides to reverse its rake and tournament fees increase.

In short, since new ownership took control of PokerStars, consistency hasn’t exactly been a word used to describe the world’s largest poker room.

However, details of Amaya’s stock buyback shows that the company is realigning in an effort to ensure PokerStars remains the dominant global card room. And that’s a good thing for Internet poker players, no matter where you reside. The move indicates corporate executives believe PokerStars and Full Tilt alone are fully capable of meeting shareholder and investor expectations.