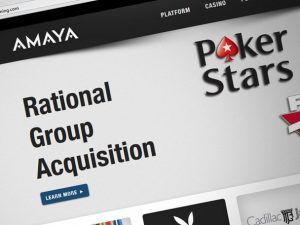 Amaya is closer than ever to sealing the deal on their PokerStars and Full Tilt acquisition. (Image: pokerfuse.com)

Things are looking up for Amaya Gaming. The news that the Canadian company’s acquisition of the Rational Group has received regulatory approval from all jurisdictions where PokerStars and Full Tilt are licensed has sent its shares rocketing skywards to an all-time high.

Amaya, which also said this week that its shareholders had officially approved the acquisition, announced the news in a press release, and now moves towards completion of the takeover sometime next month.

In the hours following the release, Amaya’s stock shot up 14 percent, closing the day at $29.61. Buoyed by market enthusiasm, Amaya CEO David Baazoz has said that he envisages a second listing for Amaya on either the London or New York stock exchanges.

More Online Poker Licenses than Anyone

While the approval of most jurisdictions worldwide was expected to hit with little fuss, it’s actually the response of New Jersey that will likely please Amaya the most.

The Rational Group prides itself on holding “more online poker licenses than any e-gaming company,” and it is widely trusted and respected in the vast majority of online gambling jurisdictions across the world, with the exception of the new US markets, where its “bad actor” status has continued to rankle regulators.

PokerStars has so far failed to obtain a license in any of the new American markets, but New Jersey has reacted positively to the idea of including a revamped PokerStars led by Amaya Gaming. The Amaya takeover was specifically designed to remove Mark and Isai Scheinberg from the equation; the father and son founders of PokerStars still have black marks against their names for the site’s continued activity in the US following the passage of the Unlawful Internet Gambling Enforcement Act (UIGEA) of 2006.

“Mark Scheinberg pioneered the online poker industry, building a remarkable business and earning the trust of millions of poker players by delivering the industry’s best game experiences, customer service, and online security,” said Baazov recently, on bidding goodbye to the PokerStars founding dynasty. “Working with the experienced executive team at Rational Group, Amaya will continue that tradition of excellence and accelerate growth into new markets and verticals.”

New Jersey thinks it can work with the new-guard PokerStars. Within days of the news of the takeover, regulators said they were already scrutinizing the firm’s eligibility for a license and have said they are “optimistic” that the world’s biggest online poker company will be able to enter the market soon.

While the majority of gaming companies with a potential stake in a post-regulation California online poker market are anxious to keep PokerStars out of the picture, the consensus in New Jersey is that its inclusion would breathe new life into online poker there, bringing those who play on illegal offshore sites out of the cold and promoting the game with big marketing bucks.