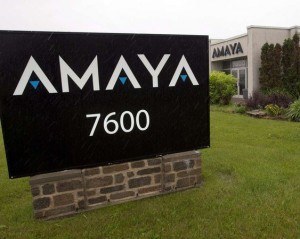 Amaya Gaming’s offices in Montreal, which were raided by authorities this week. Amaya says it is cooperating with the investigation. (Image: AP)

Amaya Gaming’s Quebec offices were raided by Federal Canadian police and provincial financial market regulators on Wednesday as part of an investigation into trading activity in the lead up to the company’s $4.9 billion June acquisition of the Oldford Group, parent company of the Rational Group, which owns PokerStars.

Amaya’s stock rose rapidly in the weeks prior to the announcement of the summer takeover, suggesting something was going on behind the scenes. Meanwhile, rumors of the deal were reported in the gambling press a full three weeks before it was publicly made official. On the Friday before the rumors were first publicized in the press, stock shot up by nearly 14 per cent.

“[This] operation is part of an AMF investigation on that company. I can’t go further for the moment,” said Sylvain Théberge, a spokeman for Autorité des Marchés Financiers, which regulates Quebec’s financial markets.

Amaya released the following full statement on Wednesday night: “To provide clarification on a media report, Amaya Inc. (the “Corporation”) (TSX: AYA) confirmed that the Corporation and its officers are cooperating with the Autorité des Marchés financiers, the securities regulatory authority in the Province of Quebec (the “AMF”), in an investigation with regards to trading activities in Amaya securities surrounding the Corporation’s acquisition of Oldford Group in 2014.

In a separate statement, a Manulife Financial spokeswoman said: “We are aware of the actions taken yesterday by the AMF and RCMP and are fully cooperating with this investigation.”

Amaya, which is listed on the Toronto Stock Exchange, was one of the success stories of the financial markets in 2014, with shares of the company rocketing by 340 percent over the course of the year, largely as a result of the PokerStars acquisition.

The deal, which transformed Amaya from a relatively unknown online gaming services provider to the biggest online gambling company in the world, was backed by the credit division of Blackstone Group, the world’s biggest private equity firm, and was funded primarily through debt financing.

Back in May, before the acquisition, as its share prices soared, Amaya tried to play down the market rumors, although it didn’t exactly deny them either.

“Strategic acquisitions have been and are one component of the company’s growth strategy and … from time to time, this process leads to discussions with potential acquisition targets. There can be no assurance that any such discussions will ultimately lead to a transaction. As a general policy, Amaya does not publicly comment on potential acquisitions unless and until a binding legal agreement has been signed. The company intends to make no further comment or release regarding current market rumours unless and until such comment is warranted,” an Amaya statement read last spring.

As long as we can continue to play on PokerStars, it’s a fine with me…