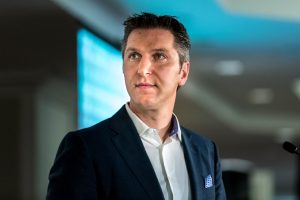 David Baazov has reportedly hired Deutsche Bank and Goldman-Sachs as financial advisors, although no formal offer has yet been presented. (Image: horizonweekend.ca)

Several top Amaya executives could be jumping on a bid by their CEO and chairman David Baazov to acquire the company and take it private.

Amaya said this week that its executive vice-president for corporate development, Marlon Goldstein, along with three other unnamed senior management figures, may be joining the potential takeover.

In a move that caught many by surprise, Baazov announced his intention to acquire Amaya via a press release on February 1st. He said that he is “currently in discussion” with a group of investors and expects to make an all-cash proposal to acquire the PokerStars parent at a price of CDN$21.00 per common share. This would value the company at CDN$2.8 billion, or around US$2 billion.

While Amaya said it had, as yet, received no formal offer from Baazov and his investor group, a special committee of its board has appointed Barclays Capital Canada Inc. to review the proposal when and if it appears. It has also engaged law firm Blake, Cassels & Graydon as its legal advisor.

Baazov, meanwhile, is believed to have enlisted Deutsche Bank and Goldman Sachs as financial advisers on the matter.

Amaya’s share prices soared in early February in the wake of the news, while Alex Dreyus of the Global Poker Index suggested that privatization would be a good thing for PokerStars and poker players.

“[As a public company] the management was not driven by long-term approach, but by short term return,” he wrote on LinkedIn earlier this month. “It was frustrating. It was legit, but it doesn’t help poker, and those who love that industry. No risk, no profit … I can sense that with this financial move, David Baazov will re-invigorate the poker landscape.”

Others, though, were more circumspect. Steve Symington of the Motley Fool warned investors of the “regulatory, economic, and legal challenges Amaya faces” as well as the “added risk of Baazov’s offer falling through.”

“I’m personally content continuing to watch Amaya from the sidelines,” he said. “And if I were already an Amaya shareholder, I would strongly consider taking at least some of today’s gains off the table.”

Meanwhile one top-ten Amaya shareholder, who spoke to Business News Network on the condition of anonymity, said that Baazov’s $2 billion valuation of the company was way too low. Amaya acquired PokerStars parent, the Oldford Group, for a highly leveraged $4.9 billion in 2014.

“The odds of a deal are good,” said the shareholder, “though it won’t be at this price.”