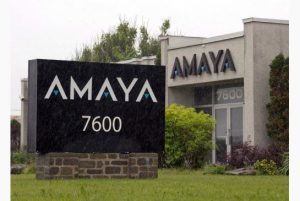 Amaya’s HQ in Montreal was raided by financial investigators in December. New documents reveal that three employees are now under investigation for alleged securities irregularities, though Amaya denies the charges. (Image: Ryan Remiorz /The Canadian Press )

Three Amaya gaming employees are being investigated by the Quebec financial regulator Autorité des Marchés Financiers (AMF) for alleged improper conduct in the lead up to the company’s $43.9 billion takeover of PokerStars last year.

The AMF was granted approval to confiscate computers and electronic security devices from the three staff members whose names have been redacted from the document, following a search warrant being granted by a Quebec court.

Amaya’s Montreal offices were raided by the AMF in December as a result of an investigation into alleged unusual stock trades in the weeks prior to the PokerStars acquisition.

Shares in Amaya shot up during the month leading up to the sale, soaring by 14 percent in one day, alone three days before the rumors of the takeover were first published in the gambling press. In fact, between the release of its Q1 financial report and the day of the announcement, the price almost doubled.

The documents reveal that the AMF was initially interested in 20 individuals variously employed at Amaya, Manulife Securities Inc., and Canaccord Genuity Corp.

The latter two companies facilitated the deal between Amaya and the Oldford Group, the parent company of the Rational Group, which in turn owns PokerStars. It’s believed the AMF launched its investigation after being contacted by whistle-blowers.

Meanwhile, the US-based Financial Industry Regulatory Authority (FINRA) has launched a separate investigation and is said to be looking at some 300 reportedly suspicious trades, although Amaya has said that it is unaware of the FINRA probe.

Amaya continues to insist that its hands are clean, and this week’s revelations have done little to change its stance.

“The release of the redacted documents presents nothing new to Amaya,” the company said in an official statement. “Amaya has previously received the redacted affidavit and reviewed its limited contents and did not contest the court’s decision today. It will wait to see the actual unredacted affidavit, but it does not believe there is a reasonable basis for proceedings against Amaya or its employees.”

Baazov Says No Evidence of Violation

“The AMF investigation has not resulted in any proceedings and no charges have been filed. The company is confident that at the end of the investigation the AMF will come to the same conclusion as Amaya has; that if there were violations of Canadian securities laws, they were not committed by the Company, officers or directors,”the issued document continued.

“Amaya thoroughly reviewed the relevant internal activities around the Oldford Group acquisition and has found no evidence of any violation of Canadian securities laws or regulations, nor has the company been provided with any evidence that any executives, directors, or employees violated any securities regulations,” he said.