Alex Jacob Advances to Semis in Jeopardy Tournament of Champions 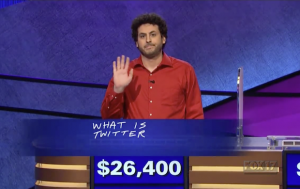 Alex Jacob, a former professional poker player, made quite an impression on Jeopardy this past spring. Jacob won six straight games while piling up more than $150,000 in earnings during seven appearances on the popular game show.

Jacob is once again a Jeopardy contestant. This time, he is competing in the show’s Tournament of Champions which pits top past performers against each other.

He finished with $26,657, far more than double either of his competitors.

He will compete in the semi-final round this week, with $250,000 given to the tournament’s victor.

Before Alex Jacob was a Jeopardy star and a currency trader, he was a respected poker player. Known as one of the smartest players in the world, Jacob earned more than $2.6 million in live poker tournaments.

He cashed 25 times in WSOP events from 2006-2012. He doesn’t have any cashes since after giving up poker to pursue a different career. But over a short period of time, Jacob dominated the tournament circuit.

His biggest win came in 2006 when he won the United States Poker Championship and the $878,500 that went with it. That same year, Jacob finished second in a WPT event at Foxwoods, earning $655,507 for his efforts.

During the poker boom years, Jacob was a popular poker pro because of his skill and the classy way he conducted himself on the felt. Many of the tournaments he played in were televised.

Back in the spring, Jacob was busy using his brain for another difficult competition called Jeopardy. One of the most popular game shows ever, Jeopardy is a challenging trivia game.

Only those with a high IQ are given an opportunity to compete on Jeopardy. Jacob showed the world he’s smarter than the average smart person.

He went on an impressive six-day run that received as much criticism as it did props. Jacob isn’t a conventional Jeopardy contestant. Instead of choosing answers at the top of each category and working his way down the ladder, he tends to select ones at random.

This style of play led to heavy criticism on social media from long-time Jeopardy fans that apparently don’t care much for those that are different.

Regardless of the opinion of anonymous social media posters, Jacob performed as well as some of the top Jeopardy contestants of all-time. Clearly, his strategy was effective, popular or otherwise.

This past Friday, Jacob picked up another victory on his way to potentially winning the 2015 Jeopardy Tournament of Champions title. Two more consecutive wins and the money and title will be his. The poker community will be rooting for him.

Congrats to Alex Jacob ! It sounds like his talents extend in many directions .