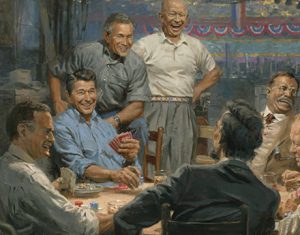 Rockford man combines poker and politics in a game based on the top US presidents. (Image: traditionsfurniture.com)

Presidential poker might often be a term used to describe the jousting between nominees for the White House’s top job, but one man has taken things to a literal level with a new game.

Alex Gary from Rockford, Illinois, has invented a new variant of poker that uses US presidents throughout history instead of traditional suits and hand rankings.

With Donald Trump and Hillary Clinton dominating the headlines across the US and the world at the moment, Gray felt it was time to unleash his game on the nation.

Talking to WIFR.com, Gary explained that his invention, Presidential Poker, is a twist on traditional Hold’em.

Naturally, given that virtually everyone has a political persuasion, Gary was keen to avoid any bias in his rankings, which is why he’s tried to back up his rankings with stats and historical research.

“I wanted to create a ranking that was 100 percent fair and not just saying this is you because I want Republicans, I want conservatives, I want Libertarians, I want Green Party people to buy this game,” Gary told WIFR.com.

Going back to 1948, Gary factored in the historical rankings of 43 presidents and his custom deck assigns points to each card ranging from one to 43.

In addition to only having 43 cards (which will become 44 when Trump or Clinton become president in January), there are just three suits: Republicans, Democrats and Other (old-timers, Federalists, Democratic-Republicans, Whigs and one Union president).

According to Gary, you can play Stud, Draw and Hold’em using the deck, but the twist is that you need to make a strong poker hand and consider your points at the same time.

In fact, as the inventor has pointed out, a low value straight could actually be beaten by a pair with more points.

So who are the highest and lowest ranked presidents? Within the context of Presidential Poker, they are:

While it’s unlikely the game will become a hit with serious poker players, it certainly captures the moment and, for $9.95, it’s probably worth a try if you’re looking to get into the spirit of the US election.