Despite unexplained cancellation fears a week before the event, the inaugural World Series of Poker Circuit at Potawatomi Hotel & Casino in downtown Milwaukee, Wisconsin proved to be a successful affair. On Monday, the stop concluded with 32-year-old Alex Aqel besting a field of 677 entrants to win the WSOPC Potawatomi $1,675 Main Event for $208,184 and a seat into the 2017 Global Casino Championship.

The win came just four months after Aqel outlasted 595 other entrants to win the Mid-States Poker Tour Potawatomi for $138,385. 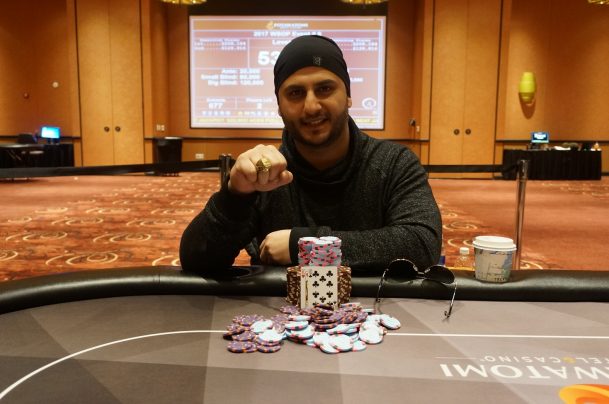 The stop kicked off with Event #1 $365 NLHE Re-Entry, which drew 1,272 entrants and surpassed January’s MSPT Regional field of 1,169 entrants to set a new state record for largest attendance. However, to be fair the former did it in four fights and unlimited re-entries while the latter only hosted three flights and a single re-entry option.

“Playing for that amount of money is a lot easier because I just recently had a big score myself,” Aqel told WSOP officials after the win. “It was more that I just wanted to win a WSOP Main Event. That was huge for me.”

The Wisconsin poker community was energized by the WSOP’s first visit to the Badger State, and many of them took advantage by capturing gold. Josh Reichard was the first to make a splash by topping a field of 227 entrants to win Event #5 $365 Pot-Limit Omaha for $17,021 and his sixth circuit ring.

“It’s kind of my home casino,” Lauson told WSOP officials after the win. “I definitely feel I have that home field advantage.”

Finally, Byron Ziebell, a well-known member of the Madison Poker Community online group, came out on top in Event #10 $365 NLHE Turbo for $19,547 and his first ring.

The WSOP Circuit will return to Potawatomi in 2018. In the meantime, the Circuit’s next stop is underway at Palm Beach Kennel Club in Florida. Loni Harwood is already making headlines there after capturing her third gold ring.