Alex Aqel, a 32-year-old from Chicago, emerged victorious for $138,385 cash in the second-largest major poker tournament ever held in Wisconsin last weekend. The Mid-States Poker Tour Potawatomi Hotel & Casino $1,100 buy-in Main Event attracted 596 entrants, which was second only to the 635 that competed in the tour’s Spring 2015 event. 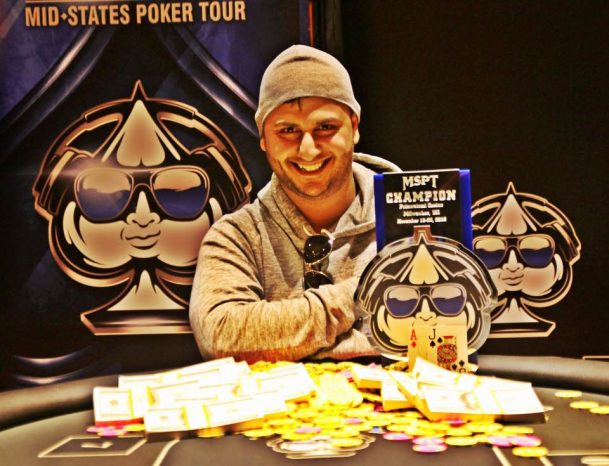 Alex Aqel topped a field of 596 to win the second-largest major poker tournament in Wisconsin history. He took home $138,385 for his victory. (Image: MSPT)

Of the 111 players returning for Day 2, Aqel sat second in chips. It didn’t take him long to assume the chip lead, and shortly after the money bubble burst, he was the first player with over a million in chips. Amazingly, he would stay out front to the end.

“I want to say I played amazing, but it wasn’t that hard to play,” said Aqel, who splits his time playing poker and being involved in a tech firm with his brother. “Tournament poker is swingy. Anything can happen.

“I just got really fortunate in a lot of spots. Deserving to win the tournament, no I don’t buy into that. Everyone else who played this tournament deserved to win it just as much as I did.”

In mid-November, Alsup finished runner-up to Carl Carodenuto in the MSPT Golden Gates Main Event. As such, Carodenuto took over the top spot on the MSPT Season 7 Player of the Year leaderboard with 3,800 points, while Alsup was close behind with 3,600.

Alsup could have tied Carodenuto here in Milwaukee had he finished anywhere between 28th-36th place, but unfortunately, he was ousted in 40th for 100 POY points. That cut the gap separating them in half, with one stop left to go in the season.

Aqel began the final table as chip leader, and in the very first hand, he eliminated Randy Perkins, who had been second in chips. It happened when Perkins, who held two million, raised to 100,000 under the gun with K♠J♠ and then called when Aqel, who had 2.235 million, three-bet to 300,000 with the Q♠Q♦.

“He just fired. I thought he had at least tens or jacks,” said Aqel of the hand. “I was really surprised to see king-jack. I was really fortunate enough to win that.”

That gave Alex a huge chip lead and helped pave his way to the winner’s circle.