Albert Riera Denies Being Fired From Udinese for Playing Poker 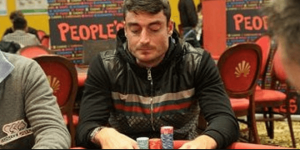 Albert Riera at the poker table. The Spanish winger claims allegations that he was fired by Udinese because he missed a game to play poker in Slovenia are untrue. (Image: turkish-football.com)

Albert Riera, the former Liverpool player, denies he was fired by Italian Serie A club for playing poker this week. It was alleged by some media sources that Riera played truant from Udinese in order to attend a poker tournament in Slovenia.

While the rest of his team was engaged in a hard-fought battle against Chievo Verona on November 23, Riera was busy collecting $4,700 for finishing second.

Hendon Mob does indeed record a tournament in Slovenia that day, the € 270 + 30 NLH Main Event of the DSP Rewind, although it does not record the winners.

While we all know that Spanish wingers like a good flop, Riera has denied that his attendance at the tournament was the reason for his dismissal.

“To clarify, the termination of the contract (is) by mutual agreement, not due to reasons outside the football,” Riera tweeted.

However, there certainly seems to be bad blood between Riera and his former employers, with Riera recently blasting Udinese as “the worst blub I’ve ever played for,” on Twitter, and we have a inkling that this may also have been factored into the club’s decision to terminate his contract.

Riera joined Udinese at the end of last season, but was immediately farmed out on loan to English Championship Club Watford, which must have stung the pride of a man who was signed by Liverpool for $8 million and has won 16 caps for Spain. Riera left Liverpool under a cloud of ignominy in 2011 after complaining about his lack of first team games and criticizing manager Rafael Benitez in the Spanish press.

He spent a season at Olympiacos in Greece, and then Galatasary in Turkey before his contract was rescinded and he left for Italy, via the M25 to Watford. And considering Riera’s soccer career isn’t quite going according to plan these days, all we can say is its handy he has his poker skills to fall back on.

Out of Position: Soccer Players and Their Poker Mishaps

On the back of a season at Liverpool that truly confirmed Luis Suarez as one of the best players in the world, he was snapped up as a poker brand ambassador by 888.com. Risky, considering his past disciplinary record, which included a notorious biting incident, but latterly Luis seemed to be turning it around, concentrating on his football and showing a new level of maturity and good behavior.

However, just a month later, at the World Cup in Brazil, the sight of Giorgio Chiellini was too much for Suarez, and he duly sank his Bee Gee-like ivories into the Italian defender. It was one toothy atrocity too many for 888, which dropped him like a sack of logs before he had barely played a hand of poker.

Speaking of enormous ivories, the man once known simply as “The Phenomenon,” Ronaldo (The Elder) is currently immersed in the process of improving his poker skills, having signed up as an ambassador for PokerStars. However, he was recently beaten by fellow PokerStars sponsoree Rafa Nadal in a charity match-up, and as a forfeit was forced to clean the dishes in the casino’s kitchens. (Although we doubt he actually did this).

Wayne Rooney may be dynamite on the football field, but it seems that his skills on the felt leave a lot to be desired, if reports that he once lost his new Chrysler 300C to teammate Phil Bardsley during a game of Texas Hold’em are true.

However, we should put that into perspective; at the time (around 2006), the car was worth around £25,000 ($39,100), which was about half of Rooney’s weekly wage. Today it would represent 1/12th of his weekly wage. That has nothing to do with inflation and everything to do with the fact that Rooney earns ludicrous money.

Of course, he really should be taking lessons from his England striker predecessor, Teddy Sheringham, who is now a well-respected a cash game player on the London scene with a Hendon Mob listing as long as your arm.

“While we all know that Spanish wingers like a good flop” nice hand Sir!

At least Riera is getting his priorities right. You can only play fotty into your late thirties if you’re lucky, but you can play poker forever…just ask Mr. 10 2