Aik Chuan recently became the first player to win back-to-back main events on the Asian Poker Tour. Perhaps taking a break from poker is what was needed to revitalize his career. 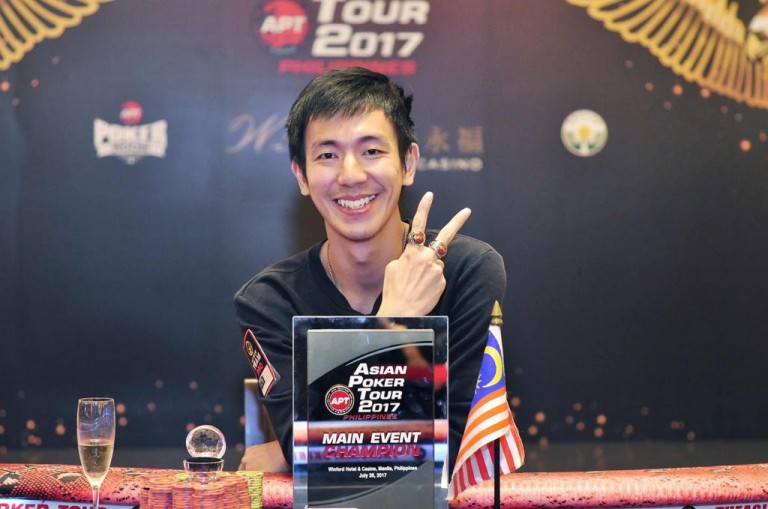 Aik Chuan is the first person to win consecutive main events on the Asian Poker Tour, keeping up a streak of victories by Malaysian players. (Image: APT)

He now has $240,931 in career earnings, placing him 12th on the all-time list of tournament money winners from Malaysia.

Chuan did not say whether he was going to try for three in a row at August’s APT Korea Incheon. But his wins come after he took a 24-month break from the game.

“It feels really good to win the main event again,” he said. “I’ve had some issues that kept me away from poker for a while and it feels good to be back. I put in many hours to be better that I am so comfortable playing against anyone at the table.”

At the APT Southeast Asia, Chuan employed an aggressive gameplan and ended the day with a massive chip lead. His big stacks proved helpful in weathering storms that were to come. He started Day 2 with some devastating defeats, losing a sizable amount of chips when he twice ran into opponents holding pocket aces.

Chuan rebounded and took back the chip lead. In one key hand, his opponent had A♥ Q♥ against his 8♠ 5♠. Unsuprisingly on a flop of 9♠ 8♥ Q♠ and he moved all-in and quickly got called. A K♠ on the turn and fortunes turned, too.

Before Day 2 was complete, Chuan had taken down another large pot with a pair of jacks, sending him to the final table again with a monstrous stack.

On the last day, he maneuvered his way to end up heads-up against Mitsuru Sano from Japan, who by that point had the chip lead. The pivotal hand that propelled Chuan to victory occurred when Sano pushed all in with Q♥ 7♥, only to be snap-called by Chuan with a pair of nines. As the board ran out, he ended up with quads, which doubled him up and positioned him to close out Sano shortly thereafter.

Three weeks later, Chuan kept his good luck rolling in the APT Philippines. He again utilized forceful play to bring a nearly chip stack to the final table that was nearly double the size of his nearest opponent.

He would need those extra chips, too. With eight players remaining, Chuan saw his stack drop dangerously low with some bad beats and an ill-advised bluff. He’d survive, however, to still be among the final four, at which point he mounted a comeback.

He got out of short stack position with a double up, and again began playing more aggressively to climb back into second position. He knocked out one player with pocket kings, and then sent another to the rail to get heads-up against Japan’s Masato Nikawadori.

The two battled for a bit, but the Japanese amateur got dealt pocket jacks, getting him eagerly to move all-in, only to run into Chuan, who this time held the pocket aces.