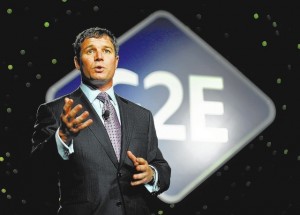 AGA president Geoff Freeman speaking at G2E on Sept. 25, 2013. The AGA withdrew support for online gaming in the US after a wide split of opinions among operator members.
(Image: David Becker/LVR-J)

As the months roll on and talks continue, common ground has yet to be found on the subject of online gambling in the United States. The myriad of states, casinos, organizations and individuals on each side of the argument are firmly planted in their beliefs on the matter.

When such a sweeping decision is to be made, it makes sense to have the best of the industry rallied for the cause. But now the movement hoping for regulation in the US has lost one of its biggest supporters yet.

The American Gaming Association has withdrawn their support for the legalization of online gambling in the US. According to a report by The Wall Street Journal, the decision was made due to the highly divisive nature of the issue between the largest casino operators in the country.

In an interview, American Gaming Association chief executive Geoff Freeman said this heated disagreement between casinos is “an issue that the association cannot lead on.”

With Delaware, Nevada and New Jersey being the only states to have a system of legalized online gambling in place, many companies such as MGM and Caesars have pushed for an expansion of the market.

Despite its limitation in the US, online gambling has been a highly profitable industry across the world. Freshly legalized New Jersey was thought to have the potential to meet those multibillion dollar expectations, but technical issues and payment problems have interfered with momentum.

On the other hand, Las Vegas Sands CEO Sheldon Adelson and Wynn Resorts’ Steve Wynn have openly expressed their disdain for an increased online presence in the states. Adelson, one of the richest and most vocal of this side of the debate, says online gambling is harmful to society. The Las Vegas Sands also sees a large part of its profits come from foreign markets such as Macau.

“One of the things I’ve learned in this industry is we are extraordinarily competent at shooting at one another,” said Freeman in his WSJ interview. And though the AGA’s reason is a good one, it’s quite a different stance than the one the group established a few years back.

In 2011, the AGA put their full support behind legalization efforts in the US. Shortly after the events of “Black Friday” on April 15 where the Department of Justice shut down three major poker websites, the AGA took to Washington D.C. to plead the case for a bill that would legalize online poker. The AGA’s argument was that over a thousand foreign sites were still taking online bets from American players. The association argued that these websites had systems in place to fend off money laundering, underage gambling and other illegal activities.

Freeman also submitted written testimony to the House of Representatives in December 2013. His testimony further advocated the legalization of online gambling saying that prohibition only drives players into black markets and profits offshore.

“Make no mistake: online gaming is here to stay,” said Freeman in his testimony. “The government cannot put the Internet back in the bottle.”

To the AGA, it seems as if trying to get casino operators and other groups to reach common ground is a futile effort, unlike keeping players away from online gambling. The association says it will instead shift its efforts to less combative causes, like the US Treasury Department’s issues with possible money laundering at casinos.

It’s a shame that the ‘american gaming association’ thinks that its ‘operators’ have a clue about ‘gaming’ in the ‘real world’. Reality is besides the dubious reputation of the industry itself – including the increasingly aging management of operators, who seem to act like the record execs of old – seem to forget that we sit up here making BILLIONS delivering games. From social to skill to phones, computers, game consoles and TV’s without all the drama, clutter and confusion in our opinion of companies and operators that should stick to making boxes with spinning wheels and tables with felt on them.

We have a hands off policy to distribute anything gambling in part because we can’t trust the industry or the technology that attempts to deliver an experience online with little or NO CONCERN for securing and protecting the systems that deliver them.

Here is your problem AGA, many companies and characters come in and can’t actually define what online gambling actually ‘IS’. We know there are many classes of rules and regulation and games that are self regulated. There is in our opinion, no enforcement of compliance or control of the systems.

When we show that we can log on from California on any device an place a wager the comment is ‘well we know we have issues, and we had to launch something, we are trying to improve’.

‘When we show issues about security issues like zero day vulnerabilities and botnets, rest assured that nobody we have spoken with had a clue what we were asking about except to say that they don’t allow bots to play poker hands.

When we ask why Banks are not allowing the processing of transactions. The truth is they too don’t want or need the risk or exposure to an industry that can’t be trusted. If you think that the breaches of Target, Ebay, IBM, Microsoft, et al are bad its only a matter of time before this honey pot of customers is not only attacked but the money grab will be huge. Problem is that not enough consumers in the US are signing up to play games that touch real money gambling, as opposed to skill or virtual currency games where they can control their spend and at least feel entertained.

Here’s a thought, let us know when you can provide a secure and compliant system come back to Mt View. That is if your excutives and represenatives, which make us feel like taking a shower after meetings, and the gambling industry which appears to be stuck in the dark ages of technology and land based experiences can actually present a comprehensive technology solution that protects the consumer, the brands that enable your ‘bidding’ and of course when Las Vegas realizes that its not the center of the universe for ‘gaming’. New Jersey couldn’t even hire experts in their own State to advise them on telecom and technology issues they had to go to Malta for such ‘expertise’ that appearantly failed.

They should of posted odds on their CRAZY ‘estimates’ or revenue, obvious prepared by an East Coast first year Ivy League MBA who wanted to go into politics.

In our opinion the reasons online gambling gaming isn’t taking off;

Its the PEOPLE running the business !

NOBODY TRUSTS THE INDUSTRY – DOJ doesn’t, and believe me, this is going to be an interesting year from what we understand for these upstanding operators who appear to view rules and regulations as an after thought by governmental regulators. Our banking partners don’t trust the industry and advise us to stay clear as well, they won’t process payments and the games don’t engage consumers when its ‘real’ money. The industry seems to respond to this issue by looking to BitCoin or other funding mechanisms that work around banking mandates.

Virtual currency games engage consumers and certainly there isn’t anybody I know that can’t place a wager on Stanford online or mobile from ANYWHERE. We have no idea if its legal or not because we have a bunch of industry attorneys, experts or advisors that seem to want huge retainers to tell us what is legal and not legal and who can be trusted and who seems to play by their own rules.

We need to protect consumers from fraud, insecure systems, and operators that don’t understand what to do when they don’t have control of a building with wires, cameras, security gaurds, and closed systems. Worse, until my computer can comp a drink while gambling, I’ll wait until I get to the Venetian to gamble.

The other joke is, ‘how much of a check did Mr Adelson write’ to convince the AGA about their position ?

I guess even the Casino’s can make bad bets on both sides of the industry.

Don’t believe the hype. The casinos have their hooks in the AGA. The AGA says onling gambling is harmful to society? Then work on banning it on a local level too, that is if you are true to your word.