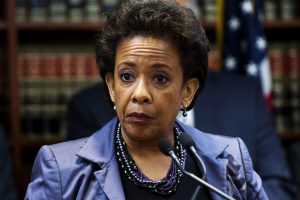 US AG nominee Loretta Lynch said that she would review the 2011 legal opinion from the DoJ that reinterpreted the 1961Wire Act, but implied that it would be unlikely to be reversed. (Image: Lucas Jackson/ Reuters)

Attorney General nominee Loretta Lynch has said that while she will review the Department of Justice’s (DoJ) reinterpretation of the Wire Act, a reversal is unlikely.

In 2011, the DoJ’s Office of Legal Council (OLC) offered a 13-page legal opinion that revised its stance on the Wire Act of 1961, stating it believed that the bill only prohibited sports betting across the Internet, and not poker or casino gambling.

This effectively opened the door for individual states to begin legalizing and establishing a regulatory framework for these games.

RAWA seeks to prohibit all forms of Internet gambling, apart from horseracing and fantasy sports, and would make no exception for the newly regulated states, Nevada, Delaware and New Jersey. The bill has been reintroduced for the 2015 legislative by Assemblyman Jason Chaffetz (R-Utah).

While Graham had a brief opportunity to quiz Lynch about her position on online gambling during her Senate confirmation hearing at the end of January, members of the Judiciary Committee were also able to submit written questions to Lynch that demanded more in-depth answers, and those answers were published this week.

In response to Graham’s desire to know whether she agreed with the 2011 DoJ reinterpretation, Lynch wrote:

“If confirmed as Attorney General, I will review the Office of Legal Counsel opinion, which considered whether interstate transmissions of wire communications that do not relate to a sporting event or contest fall within the scope of the Wire Act. It is my understanding, however, that OLC opinions are rarely reconsidered. If confirmed, I will read the opinion and if it articulates a reasonable interpretation of the law, I would welcome the opportunity to work with you and other Members of Congress to address concerns about online gambling through legislation.”

When asked whether she thought it was appropriate for OLC to permit states to offer Internet gaming without the involvement of Congress, the public, law enforcement, and state and local officials, she wrote:

“Pursuant to delegation, OLC exercises the Attorney General’s authority to provide the President and executive agencies with advice on questions of law. Because OLC helps the President fulfill his constitutional obligation to take care that the law be faithfully executed, it is my understanding that the Office strives to provide an objective assessment of the law using traditional tools of statutory interpretation. These tools would not include seeking the views of Congress, the public, law enforcement, or state and local officials on a question of statutory interpretation.”

This certainly isn’t the response RAWA’s backers were hoping to hear.

Now, with a DoJ reinterpretation of its original reinterpretation apparently unlikely, their only hope is to get RAWA passed through Congress. And with many of Chaffetz’ and Graham’s Republican colleagues appalled at the bill’s proposal to interfere with states’ rights, it remains a longshot.

so how the heck are sites like fanduel and draftkings running in the U.S. without reprecussions?

they bust up online gaming when someone’s real business is threatened by a virtual one .I mean to say someone who has contributed significantly to a politician or attorney general’s campaign ! calling in your chips might be another way to express it .