Day 10 of the 2017 World Series of Poker (WSOP) saw another player capture his third bracelet, this time 22-year-old Adrian Mateos becoming the youngest ever to accomplish the feat. In addition, a familiar face from the historic “Moneymaker” final table of 2003 captured a second bracelet. 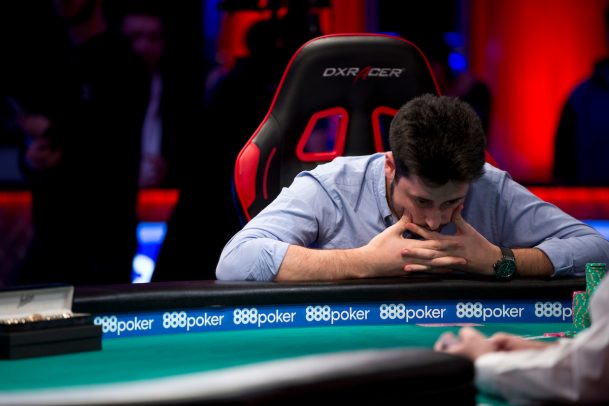 22-year-old Spaniard Adrian Mateos (seen here contemplating a move against opponent John Smith in the $10,000 Heads-Up No-Limit Hold’em Championship on Friday at the Rio) has made a trio of WSOP final tables, and won each one, making him the youngest three-time bracelet winner in history. (Image: JamieThompson/pokerphotoarchive.com)

For such a tender age, Spain’s Mateos has one of the most impressive résumés in all of poker. As it concerns the WSOP, he has seven cashes, totaling $2,484,128, and three final table appearances, all of which are wins. That makes him the youngest player in history to win three bracelets.

“[It feels] really good, for sure,” Mateos told WSOP reporters. “I think it’s pretty hard to have three bracelets and I have it, so I’m pretty happy.”

Crowd Favorite Defeated
Mateos, who won a bracelet last summer in the $1,500 Summer Solstice and the 2013 WSOP Europe Main Event, defeated fan favorite John Smith in the final round. Smith, a 70-year-old highway contractor and Purple Heart recipient from California, finished runner-up in the event for the second year in a row.

But Mateos’ road to victory wasn’t easy. In the first round, he defeated Daniel Negreanu, and then followed that up with a win over Ian O’Hara in the second. The next three opponents he faced on the bracket included Eric Wasserson, Taylor Paur, and Ryan Hughes. He then had to go head-to-head against SCOOP champ Charlie Carrel in the Final Four. It took him just 37 hands to finish off the young Englishman.

Mateos also became only the third player so far this year to win their third bracelet within a two-day span. Both Frank Kassela and David “The Dragon” Pham did it the day before.

Poker fans might best remember David Singer from the 2003 WSOP Main Event final table, when he finished ninth for $120,000. As of Friday night, he’s now a two-time bracelet winner.

“Obviously, it went back and forth,” Singer told WSOP officials about the marathon heads-up duel. “Most of the time I played well, but I was getting unlucky in the big hands. I was kind of frustrated but I always think I have a chance to come back.”

The third and final day will get underway at Noon PT on Saturday.

The final ten players will return at 2 pm PT on Saturday to play down to a winner.

One of the new events to kick off on Friday was Event #18: $565 Pot-Limit Omaha, which drew 1,711 and 1,479 players for Flights 1A and 1B respectively. That was 707 more entries than the year prior, making it the largest live PLO tournament in the world.

Action will resume at 2 pm PT on Saturday.

The other event to kick off on Friday was the $365 buy-in Event #19: The Giant, which will offer Day 1 flights every Friday between now and July 7. Those who advance will then return on July 8 for Day 2. The first flight of the inaugural event drew 1,629 entries and generated a $488,700 prize pool.

Get Ready for Milly Maker

Two new events will commence on Saturday. The first is Day 1A of the $1,500 buy-in Millionaire Maker at 10 am PT. The tournament allows for one re-entry per flight and is guaranteeing a $1 million prize to the winner. The second flight will take place at the same time on Sunday.