Adrian Mateos has again proven why he is one of the best tournament poker players in the world. The Spaniard shipped the $10,300 Partypoker Millions World Main Event in the Bahamas for $1,162,805 on Saturday, just days after winning the $25,500 Super High Roller for $520,464. 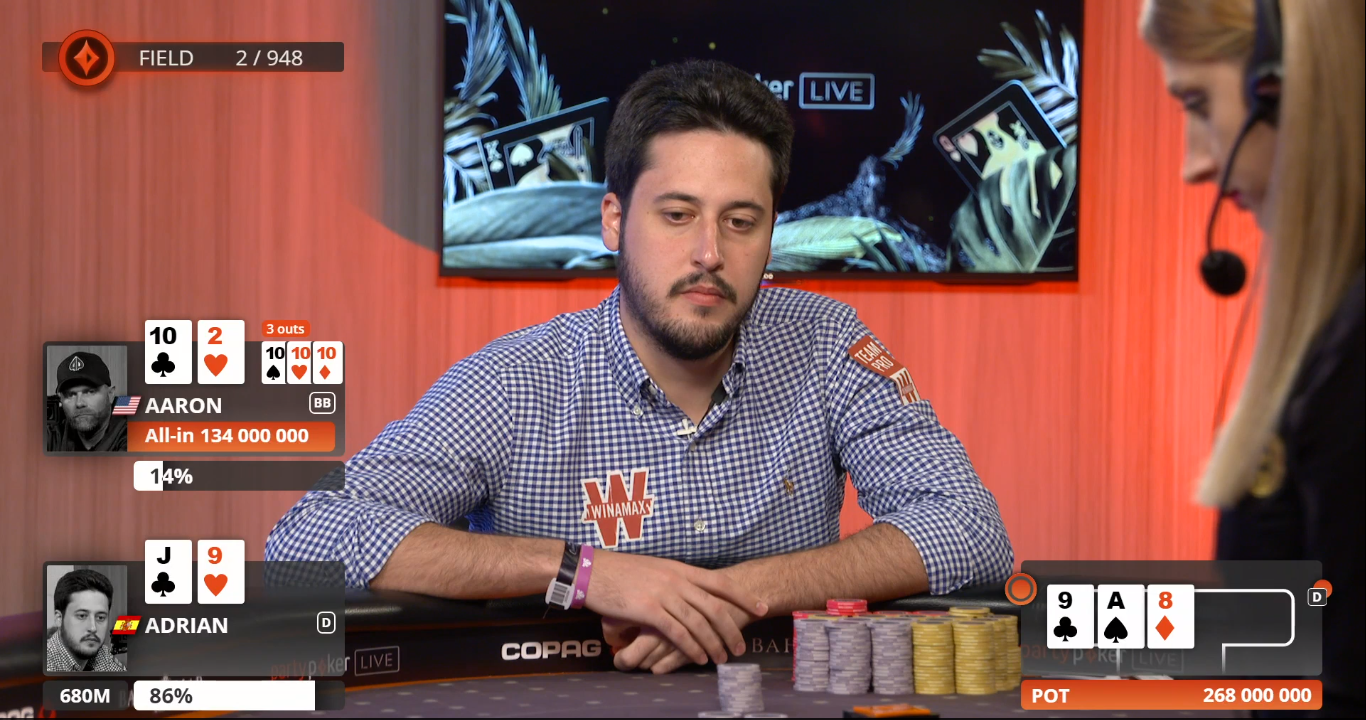 Adrian Mateos took down one of the biggest tournaments of the year. (Image: PokerGo)

Mateos, a feared pro on the high-roller circuit, beat a huge field of 948 entrants. He agreed to a three-way chop with runner-up Aaron Van Blarcum and third-place finisher Chris Hunichen prior to the start of three-handed play. Each player agreed to set aside an extra $100,000 for the winner, which Mateos claimed.

“Big Huni” lost a crucial, massive pot against Mateos at the final table. Mateos turned a set of 7’s on a board of A-J-6-7-10 and was up against A-K. With 250 million already in the pot, Mateos checked back the river, and Hunichen put him all in for another 158 million. Mateos snap-called and doubled into the chip lead.

Hunichen was eventually eliminated in third place, his second deep run in a live-streamed event in the past two weeks. The high-stakes pro also scored a second-place finish in the $50,000 Poker Masters finale for $442,000, losing heads-up to overall series champion, Sam Soverel.

Mateos negotiated a deal which paid him $1,062,805 and then another $100,000 for winning the tournament. The event had a bit of a strange conclusion.

With Van Blarcum down to about 15 big blinds, he announced he was all-in pre-flop. The only problem was, he was in the big blind, so he wasn’t first to act. Mateos then limped with J-9 from the small blind. Van Blarcum, without looking at his cards, was ready to go home and, holding true to his word, shoved his remaining chips into the middle. Mateos called.

Van Blarcum showed 10-2 offsuit, which didn’t connect when the board ran out 9-A-8-Q-6, giving the title to one of poker’s nicest and most talented players.

Whenever I can follow online tournaments and recordings.
When I watch Adrian Mateos…. I always learn a lot, he’s a great player.