Coalition to Stop Internet Gambling Brings on Lincoln and Team 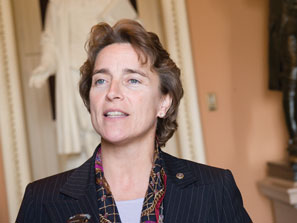 Former Arkansas Senator Blanche Lincoln (D) is but one of the lobbyists being used by Sheldon Adelson to try to sway Congress against online gambling (Image: NewRepublic.com)

When Delaware, Nevada and New Jersey opened their borders to online gaming, it was one of the largest salvos in the ongoing battle to bring legality and regulation to the United States. Those for and against the cause feel justified in their reasoning and constantly make headlines whenever rallying new support for their movement, on either side of the war.

Out of all these voices, none have been as loud as Las Vegas Sands CEO Sheldon Adelson; now the billionaire and GOP donor has brought in a new name to assist in his crusade against online gaming.

Former Senator Blanche Lincoln (D-AK) is joining the cause to enact a ban on online gaming. The Las Vegas Sands CEO hired the former Senator’s Lincoln Policy Group to lobby for his brand. Also working on the account for the firm is Lincoln’s former chief of staff, Robert Holifield. According to records, the two have been lobbying for Las Vegas Sands since early February.

Late last year, Adelson announced that he was preparing a campaign to sway both Congress’ and the public’s opinion against legal online gaming. His first step in this process was to form the Coalition to Stop Internet Gambling. Adelson also revealed that he was bringing in some political clout to provide further legitimacy for his cause.

In addition to Lincoln, former New York Governor George Pataki (R)  and former Denver Mayor Wellington Webb (D) were brought on as co-chairs to the Coalition when it was first announced. Though Adelson is known for his massive donations to the GOP, his hiring of Blanche and Webb – both Democrats – was seen as a move to make the campaign appear less biased.

The Wire and Washington

Lincoln and her firm are working towards introducing legislation that would reinstate a policy which bans gambling online. Specifically targeted is the Wire Act of 1961. In December of 2011, the Department of Justice worked out a reinterpretation of the Act which had originally placed a ban on any form of online gambling. They determined that the Wire Act only made sports betting illegal, not online gaming per se.

Starting last year, Delaware and Nevada took advantage of this reinterpretation and subsequently signed the first-ever Multi-State Internet Gaming Agreement to pool players between the two states. The deal was effectively the first such gambling compact in the United States. It would give players from either state the ability to play Internet poker on sites based in the other state.

The issue will soon make its way towards Capitol Hill. Representative Jason Chaffetz of Utah plans to introduce a bill that will reverse the Department of Justice’s 2011 reinterpretation of the Wire Act. Senator Lindsey Graham of South Carolina might also introduce a bill to ban online gaming as well. In 2013, Graham received over $15,000 in campaign contributions from Adelson.

The justification behind the Coalition to Stop Internet Gambling and Adelson’s collaborators is that they claim this particular form of gambling is dangerous to many demographics and can even lead to crime. The Coalition saw online gambling as a hazard to children, the elderly, the poor and other “vulnerable” groups. Having easier access to gambling could exploit those groups, the Coalition maintains. Lincoln even feels that it could be used for fraud and money laundering.

Adelson’s push for an online gaming ban is obviously helped by his large fortune; over $300,000 was spent in a year lobbying for the cause. He says he will spend whatever it takes for a ban on online gambling to happen, and he certainly has the deep pockets to do it. However, with a huge push back from the other side via the Coalition for Consumer and Online Protection (C4COP) – supported by several high-profile Washington lobbyists and the AGA, not to mention three states being heavily invested in online gambling already – many think he is simply throwing his money away.