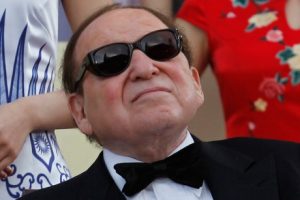 Sheldon Adelson has made it a sincere goal to stop online gambling in the United States. The head of Las Vegas Sands has invested millions of dollars in his efforts, which include the recent launch of the Coalition to Stop Internet Gambling lobbying group. He has also been courting a number of present and past members of Congress to help ban Internet gambling on the federal level.

News outlets have recently tied Senator Lindsey Graham of South Carolina and Representative Jason Chaffetz of Utah to Adelson. Both Congressmen are currently drafting proposals to introduce to the Senate and House of Representatives, respectively, to restore the Wire Act to outlaw online gaming in its entirety, as they claim it was set up to do before the 2011 Department of Justice decision.

While Adelson has been known to donate to a wide range of Republicans across the United States and support their campaigns for public office, his ties to Graham have recently come to light. Politico reported that Adelson and wife Miriam contributed $15,600 to Graham as campaign contributions in 2013. This happened prior to the launch of Adelson’s anti-online gambling lobbying group and the announcement that Graham would introduce legislation that fits Adelson’s agenda.

A Graham spokesperson noted, however, that Adelson contributed funds to many Congressmen, and Graham himself raised $8 million, out of which Adelson’s donation was small in comparison to others.

It has also been noted that Graham never took a staunch position on Internet gaming in the past, making his participation in such a bill to restore the Wire Act to its original interpretation suspect. Graham’s bill for the Senate is likely to correspond with Chaffetz’ proposal in the House, and the latter’s ties to Adelson are viewed as more than coincidental.

Adelson has not been a major contributor to Chaffetz’ campaigns in recent years, and the US Representative is no stranger to the issue of gambling, having supported efforts in his home state of Utah to ban land-based and online gambling. However, it seems that Chaffetz’ bill to ban online gambling through Congressional means – the Internet Gambling Control Act – was drafted by a Las Vegas Sands lobbying by the name of Darryl Nirenberg.

The Chaffetz anti-online gaming bill hopes to ban online poker and gambling, state lotteries online, and Internet sports betting, though there is a conspicuous carve-out for horse racing. The Congressman has not supported horse racing in his state, but may have carved it out of his federal bill due to allegiance to House Republican Leader Mitch McConnell of Kentucky, who vehemently supports horse racing.

McConnell has been tied to Adelson in more ways than a mere campaign contribution, as a 2013 inquiry revealed that Adelson hosted a fundraiser for McConnell that had gone unreported to the Securities and Exchange Commission. McConnell was also reported to have spent thousands of dollars at Adelson’s Venetian property in Las Vegas during his 2012 campaign. In addition, McConnell’s campaign benefited from Crossroads GPS, an advocacy group that received $30-$40 million from Adelson for the 2012 election.

Ties to Adelson are not difficult to find. The longtime Republican supporter has not yet commented on any of the recent reports, but campaign donations and lobbying details are matters of public record.