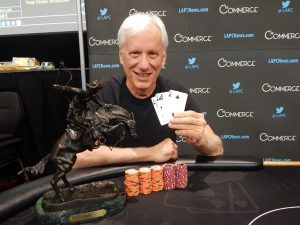 The $1,100 buy-in Omaha/8 tournament came down to Woods and Mack Lee for the $20,065 first place prize. Woods came out on top, dominating Lee during heads-up play. He received a Remington Trophy as well, which is given to each winner during the two-month long poker series.

The actor had a small chip lead (419,000) over Prince Docness (386,000), with five players remaining. He momentarily relinquished that lead to Lee. When the pair began heads-up play, Lee held a two-to-one chip advantage.

Lee’s lead held up for just a short period, though. Woods quickly burst out to a 1,000,000 to 300,000 chip lead, and then coasted to victory from there. For the now white-haired actor, it was his 5th cash already at the LAPC this year, although his other cashes were for $2,600 or less.

Poker is a favorite hobby for Woods, but it isn’t a job. The thespian has nearly $200,000 in live poker tournament earnings throughout his days of playing. But he’s made millions of dollars on the big screen.

He’s appeared in many blockbuster films. Besides “Casino,” “Nixon” and “Clerks,” he’s been featured in popular TV shows such as The Simpsons, Entourage, and Family Guy.

Woods has an impressive resume as an actor, producer, and director. The 68-year old Rhode Islander got his start in some New York City theater productions, and made it to the big screen for the first time in 1971 in the movie “All the Way Home”.

The scar-faced performer is known mostly for playing fast-talking, eccentric characters in movies and TV shows. He has a knack for delivering wisecracks and is a versatile actor.

Hollywood, like much of the rest of Los Angeles and California, tends to lean as far left politically as one can go. Actors such as Ben Affleck, Matt Damon, and others often speak out in support of liberal causes. Those in Hollywood that share opposing views are considered outsiders, and are often virtually shunned by the movie industry establishment.

But that hasn’t stop Woods from speaking his conservative mind. He frequently makes comments on Twitter that rile up the Hollywood elite.

His posts range from questioning why Hillary Clinton isn’t in prison to defending the character of the recently deceased U.S. Supreme Court Justice Antonin Scalia, a controversial conservative who often rubbed people on the other side of the aisle the wrong way.

Woods often calls out commenters who disagree with his views. In a recent post following Scalia’s death, Woods uttered the following statement about the judge, which received criticism from the lib contingent:

“A bulwark against the rampant liberal assault on the Constitution. A great American.”

Clearly, Woods is as serious about politics as he is poker. Perhaps, in fact, even more serious.

Even though I find myself (these days) with strong liberal beliefs, I absolutely love James Woods the poker player. He is always present at ever WSOP and is one of the nicest guys I have ever had the pleasure of dealing to. He even took pictures with me and another dealer after he formulated a 7 way chop at a $550 mega satellite final table that we were dealing. Plus he has done the Simpsons and Family Guy, two of the greatest tv shows of all time.

Agreed; I’m a liberal-moderate too; James Woods is a great guy to play against. He often played at Foxwoods and he was at my table twice. Hope he returns often. He is very nice, very smart, and probably the most popular player there.