Former Absolute Poker players: we have some good news to share. Customers of the defunct online poker site may soon receive money owed them since April 15, 2011, aka “Black Friday” of DOJ fame. 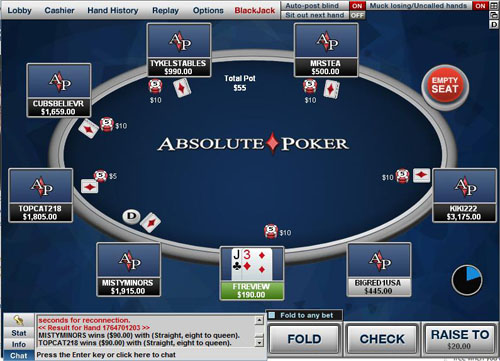 Absolute Poker players, waiting since 2011 for their money, will finally have their account balances paid out by Garden City Group. (Image: flopturnriver.com)

It was on that fateful day when the landscape of online poker in the United States changed. The US Department of Justice shut down the major online poker sites, which included Absolute Poker and its sister site, Ultimate Bet.

Black Friday shook the online poker world to its core, and American players with active accounts at the three major poker sites feared their money was gone forever. PokerStars and Full Tilt eventually paid, although it took quite a while. But Absolute Poker and Ultimate Bet, both owned by the same company, haven’t had the funds to pay back the customers.

That’s about to change. After six years of waiting, customers of the former online poker sites will get paid. Those who had money in a player account at Absolute Poker on Black Friday have until June 9, 2017 to file a petition for remission.

How Do I Get My Money?

According to the website AbsolutePokerClaims.com, the amount received will be the “last known account balance with Absolute Poker.” Emails have been sent out to former players with information on how to file a Petition for Remission. Affiliates of the poker site can also apply to get previously owed funds.

After word began spreading of Absolute Poker players receiving money, many questioned if Ultimate Bet customers would also get paid. The Poker Players Alliance advised players on Twitter that the organization was attempting to get an answer. A response by an online poker player cleared things up.

“I just filed a petition and I only had an Ultimate Bet account. They had all my info. Answer is ‘Yes’,” @grungedave responded.

So, after all these years, where is all this money coming from?

Kim announced the DOJ has hired Garden City Group (GCG) to oversee compensation for victims of the Absolute Poker debacle. The organization provided the same duties for Full Tilt Poker players, as many may recall.

Money left from a 2012 PokerStars settlement with the DOJ will be used to pay Absolute Poker victims. When PokerStars acquired FTP, the poker site paid $543 million to the feds and another $184 million to be returned to FTP customers.

After all claims were processed and paid, GCG sent $118 million to FTP Black Friday victims. The leftover money is scheduled to be shipped out to Absolute Poker and Ultimate Bet players.

Ironically, Kim’s predecessor Bharara was the same prosecutor who ran the Black Friday shutdowns, meaning some kind of full circle has now been achieved. Bharara was fired by President Donald Trump after he refused to step down from his job in March.

No timetable has been set on when the online poker players will receive their funds. But claims must be filed by June 9 to receive compensation. To find answers to other questions about the payment process, click here.